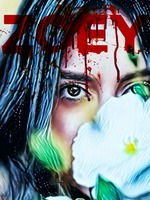 It has been argued that horror films, and violent movies, spark aggression and inspiration to commit horrible acts of violence. Though this argument has been countered, let's take a look into the life of one, Zoey Morgan. An eighteen-year-old high school student, living in an abusive household, with the constant and daily harassments from rivals at school. What will happen when this abused, and lonely art student finds great enjoyment in watching the suffering of others? In order for her to keep this desire a secret, she must juggle it alongside her daily life, and her growing feelings for her best friend.

This book contains relatively short chapters. Something you can pick up, and read in a few minutes instead of sitting for half an hour to read one chapter.

Author's Note
I am a huge fan of horror movies and read a lot of Stephen King, who is probably my favorite author. So, I wanted to write a horror story, but I'm not that good at it, so instead, I came up with an idea I'm much more satisfied with. I want to write something disturbing, and horrifying. I want to see just how far my imagination will go. Trust me when I say that some scenes may not be for the faint of heart.