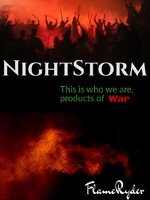 "I look in the mirror, and I don't even know who is staring back. A soldier? A kid? An experiment? A scientist? I don't know who I am. I just know what is expected of me." -NightStorm

Earth died in 2146. With its death came silence between all its daughter planets. In the time of silence, each planet grew independent, developing its own way of living. When communications returned, the inhabitants of each planet refused to change and work under one government. This mindset changed in 2235, during the first alien attack. The humans learned that there was an alien group set on wiping out humanity for good. They also learned of an underground project called the Legendary program. A program that uses children to make super-soldiers. It was because of the super-soldiers that humanity survived the first attack. But in the following years, the Legends are dying. It becomes clear that the human's need to end this war or face extinction. At the same time, people are starting to question the products of these human experiments.

Jade Ryder, aka NightStorm, is the product of a human experiment. The original test performed by her mother before she was born. Jade spent her entire life fighting to be accepted and taken seriously. She follows every order given - all except for one. Jade refuses to work in a team.
When Jade is forced into a partnership with the last type of person she wanted, a Legendary Soldier, she is forced to face her hidden fears. Jade learns that there is more to this war than she was taught, making her question if she should follow her orders blindly or open her eyes. At the same time, an old childhood illness arises, forcing Jade to reevaluate what's truly important to her.
Now, in 2261, Jade is forced to fight against the discrimination experimental upbringing while trying to find a way to end the war that took so much from her. With everything against her, Jade begins to question everything she once knew.