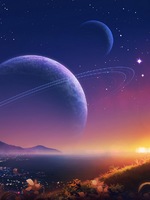 Life started in The Pit billions upon trillions of years ago, the exact point long lost in the river of time.

Those who died in The Pit found themselves reincarnated onto the planet Earth, where they would live for 9 lives before returning to The Pit for 1 life, before repeating the cycle.

However, in The Pit there was a chance to break this cycle, at the age of 8 everyone would awake a heavenly essence affinity, with one of the 99 known heavenly essences.

Through deepening their affinity with and understanding their respective heavenly essence people were able to better themselves, cultivate themselves into beings beyond mere mortals, they were able to create their own daos based off their unique understanding of their essences, and even discover new levels of The Pit!

There are 3 realms of cultivation known to those in The Pit, the Man realm, the Earth realm, and finally the Heaven realm, each of which correspond to their respective layers, the Man layer, Earth layer and Heaven layer.

Of the 47 billion people on the Man layer of the pit, 97% of these people will automatically enter the Man realm at the age of 8 when their heavenly essence spirit awakens, however 3% of people will remain as mortals, with no hope of breaking through in their life, destined to die in The Pit after 100 years and return to the Earth for another 9 cycles of life there trapped as a mortal.

When born in The Pit, a person retains only the memories of their 1st and 9th life on Earth, with the other lives remaining hidden.

Seb, an ordinary mortal from Earth in his 9th life, died at the age of 105 after living a happy and prosperous life, however upon reaching The Pit he was born into the Slums of Bemir, one of the absolute worst areas in the entire Man layer, crawling with disease, famine and general chaos, an area where laws and morality seemed to have been abandoned.

Upon being born in The Pit as an orphan, Seb relied on his memories from his 1st life as the greatest martial artist from China during his time, Seven Poisons Mo Qin, to survive in the Slums of Bemir, however when he reached 8 years of age Seb didn't awaken a heavenly essence spirit.

Unresigned to his fate, after another 3 years of killing and slaughtering in the Slums of Bemir, Seb set out into the wider world of The Pit at the young age of 11, on a journey to find a way to reach the Man realm despite his lack of a heavenly essence spirit, determined to do what had been deemed impossible by the citizens of The Pit and change his own fate!

And so Seb began a journey, a journey that would bring holy pain to the world...