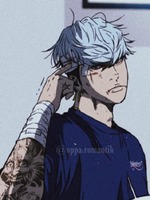 Gus, an outcast who is non-existent in school. He goes to school makes minimal effort and rushes to leave at the end of the day. He is a loner who has no friends and no life. That was what everyone in school thought he was. However, he leads a double life. He is also known as Grime, an up and coming rapper whose identity was hidden behind a mask. He expresses his pain through his music which got him a cult like following.

Eve, the queen bee of school. She is rich, attractive, kind, smart and much more. She was what all the guys wanted and what all the girls envied. She is the pride of the school and her family. She is a girl who was always sheltered by those around her.

She had everything, He had nothing
She was served everything on a platter, He had to fight for what was his.
She was his hope, He was her salvation

What happens when the loner and the golden girl get stuck in an elevator. Will sparks fly? or will they go back to their own lives?

First 10 chapter are just an introduction of the main character and are a little slow paced. After starts the real story. Packed with a LOT of Romance, some action, and did i say a LOT of Romance and also a lot of music moments too. Please give it a try.