/ Contemporary Romance / GoodBye Sweet Girl: It Ends With Us 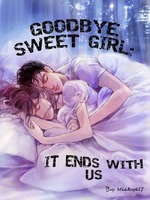 GoodBye Sweet Girl: It Ends With Us IEWUWBLG

Fifteen seconds. That’s all it takes to completely change everything about a person. Fifteen seconds that we’ll never get back. So, what is this “end up together” of which everyone speaks? where is the end? that idea comes from stories, where the prince marries the princess, or the couple ride off into the sunset together, or where they kiss as the screen fades to black.

Yet, this isn’t especially their case. For Zhang Mei Lien and Zheng Xie Na, that's not any kind of ending.

Zhang Mei Lien had everything, fans screaming her name, the title of the Queen in the Music Industry, her looks cannot compare with any mortal, She’s a goddess herself. Her life seems almost too good to be true. Yet, it sure it’s, she has one flaw, her new relationship with the well-known A-list actor, Mo Zean, stubborn, maybe even a little arrogant. He's also sensitive and has a total soft spot for Mei Lien.

Mei Lien can't get him out of her head. But Zean's complete aversion to relationships is disturbing and violent. Sometimes it is the one who loves you who hurts you the most.

As questions about her new relationship overwhelm her when the most demand bachelor and CEO of ‘Zhou Corporation’ Zhou Jin Liang reappears to claim her as his Queen, everything Mei Lien has built with Zean is threatened.

In the end, what Mei Lien would choose the Actor Abusive Boyfriend or the King of Capitalism?

Zheng Xie Na is sexy, loyal, and just better in all aspects compared to everyone. After all, she is The Queen of Act. While she went above and beyond to make the big boss happy, yet he completely ignores her and not care about her at all.

When an unknown fragile girl is about to marry the man, she was supposed to marry. She would give up on love too, right? That’s what Zhang Xie Na has done. She thinks running away from her life will solve her problems, but instead, it introduces her to a new one: Mao Zedong, the arrogant and mysterious man.

After all, falling for the good guys has never served her well before.

Can Mao Zedong be her own male lead in her real-life novel or again she would end up it as the second female lead of another protagonist story?

Accompany both Celebrities in the path of finding their own male lead trough the dangerous Entertainment platform, where schemes, lies are just the way to survive showbiz.

This novel is not allowed for under 17. It contains mature adult themes, coarse language, explicit sexual content, and graphic violence. If you read under your own accord, I don’t take responsibility.

Also please remember that this is a work of "fiction". Thank you!