/ Fantasy / The Envoy of Darkness 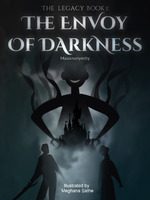 The Envoy of Darkness TED

"Everyone loves a good fantasy, but my life was turned upside down by one."
What would you do if you had the ability to control the air? How about if you were suddenly brought to a world where, despite your powers, you're at the bottom of the food chain? On a fateful night, Max Walker finds himself summoned to Asterisk and contracted to Liliana Lockwood as her familiar.
Forced to leave behind his life on Earth, Max begins a precarious journey into the unknown world of magic. Training as a knight, learning to control mana, battling rogue necromancers and even being mistaken for Duke Walker's son... it's just one thing after the next.
But as if that wasn't bad enough, Asterisk, a world which subverts reality as you know it, may just have something to do with Max's own heaven-defying origin... and a secret that could leave the universe hanging by a thread.

This is Book 1 of a projected Trilogy titled "The Legacy".

Schedule - Chapters will be published once a week, around Sunday.

P.S - Feel free to comment, especially if you have any advice or criticism to offer. On that note, if you could leave a review and/or state your thoughts about the novel as a whole that would be awesome too.

Note - The cover is not mine and full credits/rights go to its creator. The story is also not as dark as the cover makes it out to be. It's temporary until I manage to design my own. (For anyone curious, it is a fan art from FMA). If you're the owner of the image and aren't comfortable with me using it, please let me know and I'll take it down.