/ Sci-fi Romance / The Trial of Eden 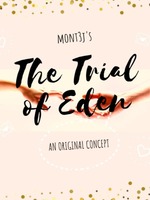 The Trial of Eden TToE

Alaine Chesney thinks her life is already perfect the way it is, but her thinking goes 180 degrees after her house is consumed by fire. As her house needs reconstruction, she used up her hard-earned savings. To quickly regain her loss, she applies for a part time job which she earned, following a great job interview outcome. Getting tired after a long day, Alaine hails a taxi to get back to her temporary home, but what she first thought of as a ride back home has turned into a marriage proposal date with the taxi driver. Alaine naturally rejected the proposal and walked away. A week later, as Alaine is preparing for her first day of part-time work, she receives a call from the employer, telling her that the job offer is off. Albeit overwhelmingly dejected, Alaine still kept her usual routine and began preparing herself for the upcoming anniversary party of the hotel where she works full-time. On the night of the anniversary party, following her short piano recital, she headed to the restroom. Upon exiting the restroom, Alaine's arm was yanked by a man in tuxedo that she deems suspicious; thus, she starts attacking; however, the former gets knocked out by the latter. Hours later, Alaine wakes up and is greeted by her captor, Dashiell Klein, who then gives back to her an item that she believes to have been lost during the fire. What’s more is, Dashiell turns out to be the taxi driver who proposed to her, causing her to grow more suspicious and to attack him until someone dear to her shows up. Who is the other person who appeared? What does Dashiell have to do with that person? Just what role does Dashiell hold in Alaine's life?