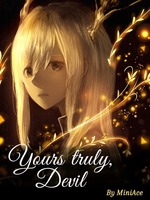 The world isn't a simple bubble to survive in with turmoils like lying, killing, hitting, fighting, fighting and fighting endlessly . What you see is nothing but an illusion. A rockstar singing at a concert is a werewolf hypnotiser, planning to catch girls and sell them. A writer of a good crime novel, is actually an elf murderer himself, writing to ease off his guilt. A rich female charity donater, is actually a fraud vampire, giving money in the name of charity for publicity, while getting fresh young children transported to her mansion as blood banks.

Nothing you see meets the eye in true sense.

In such a selfish world, a woman with hair coloured gold and pure heart, does her best to survive, against the abuse of her so-called husband.

Forced to marry, she held back her tears.
Raped on her wedding night, she bore the pain.
But losing her child? She would never forgive the doctor who caused her misfortune.

"Dr. Dylan, hear me out clearly. I won't rest until I get justice. Your carelessness is what took away my sweet poor baby. Unless you apologise publicly, or give me a proper explanation, I refuse to stop my accusations." Her kaleidoscopic eyes gleamed with unshed tears, as they glared at the handsome man before her, who sighed helplessly.