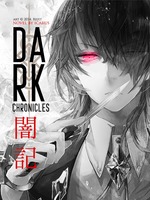 Sent to a 'Reality' game decreed by the Divines, and where killing should be the new norm. Would players go head-to-head? Or hand-in-hand? And will a sociopath, anti-mainstream survive?

Ethereal Paradigm. An order where deities are mandated to choose a human vessel, and a system where one concept reigns supreme: Play the role of the predator or become the disparaging prey. Cliched isn't it? Not exactly.

Quite similar to that of a contemporary online game, the system incorporates a virtual-like environment for the player's grandeur. The only difference it makes is that you are not on the other side of a computer screen. It is undoubtedly real. It's a gamble where your LIFE is laid as the COLLATERAL. You win? You have your wish granted and you get to play a cameo in deciding humanity's ultimate fate. You lose? You die a vile death without anyone remembering your legacy.

And here we find a life tainted with nothing but monochrome and devoid of sociality, Jaiden. He unknowingly became a part of this serious game after signing a contract with the Goddess of disambiguation "Lacrimosa", without first reading the terms and conditions. Little did he know, that he is about to become the vessel of the goddess' will, a wielder of her immense power and that soon, he will venture a mystic realm where his life will be in constant 50/50 gamble going against the odds, with a genius girl classmate he least expects to be with.

It is one hell of a war where darkness runs to and fro, seeking whom he may devour.

I. I don't own the original artwork used to embed the official trademark of the novel. The illustration is owned by the rightful owner. If he/she wants it to be replaced, it will be replaced without falters.

II. Any names, characters, and events are all FICTITIOUS and the contents are plainly SATIRE. Any resemblances in real life are all purely COINCIDENTAL.