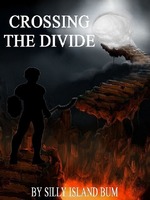 Between the Mortal Realm of the Nine Heavens and Nine Hells, and the Eternal Realm of true immortals, is a barrier known as The Divide. Failing to reach true immortality, an old man goes back to his birthplace, where he must devise a new plan forward. In his search, he saves a young boy named Liang from a nefarious poison and meets an ambitious girl named Xu Wei, who uses her talent and good looks to advance in a dangerous world.

With goals of immortality, revenge, and absolute knowledge, the three unlikely companions set off on a journey fraught with endless danger, excitement, and countless new experiences. As they face each of the challenges in the myriad worlds, the old man, Liang, and Xu Wei will team up to break through the shackles of the Mortal Realms and burst through to the Eternal, by Crossing The Divide.


*****
Crossing The Divide is a Xianxia, but at the same time, it is not. As the synopsis says, the three main characters will face challenges in a number of worlds. The first volume is primarily a standard eastern fantasy world, but each world is different, and they are not just a continuation of stronger realms or other typical Xianxia tropes. There will be both advanced and primitive civilizations along their journey, and to reach their goal, they will need to face all the challenges each world presents.
*****

Updates, M,W,F unless there is a holiday