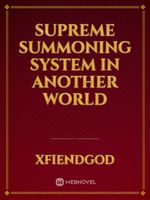 Supreme Summoning System in Another World

The most terrifying assassin on Earth was known as Shadow. It was because no one truly saw his face, perhaps they did but they all died afterward.

Shadow was a legend and became a myth several years passed by, even those governments and hidden organizations feared Shadow.

No one knows who he was but once you saw did even your entire family will be exterminated by him.

After 40 years, somewhere deep in the forest, there is a house there, inside it an old man around the 50s can be seen lying in his bed as if waiting for his death.

"I killed many people that I can't even count it anymore, and here I am waiting for my death to follow those whom I have killed. But I still cannot accept this, but I don't have any choice so all I can do is to hope that afterlife exists and will be able to reincarnate in another world." The old man weakly muttered while a small tear escape from the corner from his eyes.

After several minutes passed by, the old man breathes slowly bit by bit until he finally stopped breathing.

Suddenly, a mysterious voice said, "Your wish will be granted, mortal."

"Don't fail me, mortal. Kill, Enjoy, Conquer as much as you want." The mysterious voice from earlier said while laughing sinisterly