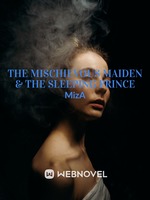 Running for her life, a tragic incident brings a Mysterious Maiden to Holstein, as a guest of the kind Prince's Bride.
Alexa's only intention is to leave as soon as possible, but it's not easy when humans and ghosts take a deep interest in the fascinating maiden.
Will Alexa survive the escalating supernatural events in the Court where the living and dead fight for supremacy?
Will her intriguing liaison with the Second Prince be a barrier between Alexa and the dangerous First Prince?

"Did Your Highness really…?" cautiously Alexa asked, simply not wanting to believe he had been able to.
"Hmm," he nodded, his eyes gleaming with pleasure. "Why do you think I went to the village port?"
"But… you even went to say goodbye at Holstein's port!"
"Well, that was when I regretted acting like a bad son and a vile man, and before God. I had to take responsibility, didn't I?"
'But what nonsense is that ?! It's not like you really put your… thing… into my… thingy….' Alexa thought, but she wouldn't even have the courage to say it out loud. But a thought came to her mind like lightning, clearing it all,
"Oh! OHHHH! You want to use me so you don't marry your bride! You set everything up! From sending me to the maze to… up to…"
"Having you in my arms, tasting your mouth as I did this peach?! Is that what you're stuttering on, Lady Saskia? This will be repeated ad infinitum when we get married. That and more," he laughed at the maiden's nervousness and indignation.
"But… Was it a setup or wasn't it?"
"AH… Well, in part I had planned on getting what you denied me the other day. But then I discovered you really were a maiden who hadn't even kissed. And I felt like… I took advantage of your innocence," Magnus sighed, pouring himself wine.
Alexa could not tell if what he said was a lie or truth, though.

♛♕♛♕♛♕♛♕♛♕♛♕♛♕♛♕♛♕♛
I hope you like this story. If you wish, please support this tale by voting, rating and commenting. Your feedback on typos or bad grammar is welcomed and appreciated.