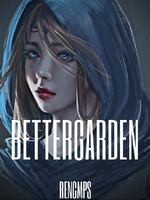 Bettergarden is an empire that formerly several races coexisted together, but the demons, led by Malyoranbharas Nemonnevry, declared war on the other races, attacking and dominating one by one. Nowadays this dimension, and some others, are completely dominated by them, but the one who led them to such triumph no longer has the same strength, their days of glory have passed, now they seek, through invocation, someone who can become the new lord of these lands, but what they didn't expect was a little baby with the necessary power for that.