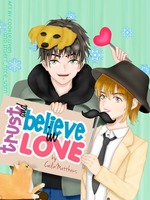 Trust in Love TiL

Alex Carter lives with her aunt and he has been attending Woodlands Academy for three years now.

Well... to tell you the truth,

Alex Carter is not just the only heiress to one of the biggest companies in the world but also she's pretending to be a guy at school much to her parents' dismay.

Fortunately, this normal and somewhat boring new life leaves her off the hook from the school's notorious playboys, unecessary dramas and juicy scandals. It was going pretty smoothly.

Until on a Monday late afternoon when Logan Parker stops by Alex's house just in time for him to catch her with extensions in her hair, make-up on her face, heels on her feet and boobs in her dress.

One thing is for sure, things were about to change. Despite all of Alex' precautions, someone slipped inside her walls and became part of her world. Will she be able to keep her true identity a secret? Or is her borrowed time over?

Join in and discover the biggest secret in this fiction world.


All Rights for the final cover belong to WN users, CailinMatthews and CookieJiyen, for the exclusive use of the novel "Trust in Love."

If you have a very kind soul and want to boost my Cai-ffeine spirit, you can go here:
https://ko-fi.com/cailinmatthews