Bloodlines of the Ancient Pantheons - Fantasy

/ Fantasy / Bloodlines of the Ancient Pantheons 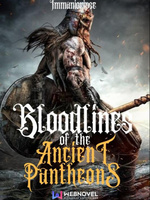 Bloodlines of the Ancient Pantheons BoAP

Millions of years in the future, the Sun collapsed, and the existence of the human race on Earth was about to end.

Yet, the arrival of the Xis, an omnipotent alien race, saved the human from mass extinction and forced them to live under the surface of the airless, dying planet.

Their act wasn't selfless though. The Xis forced the human race to atone for their sins against the Earth by sending them on a journey to explore their ancient bloodlines.

They created an artificial solar system with a planet for each of the ancient pantheons, and divided the remains of the human race according to their ancestors.

Dag, an earthling kid, is about to undergo the test of his bloodline through an alien machine called "Temporum".

The Temporum would send him to the Viking planet, where he will discover an eerie connection with the ancient Gods and learn to wield part of their power.

However, he will soon find out that his bloodline hides far more than that...

A multitude of Gods and supernatural powers.

One destiny to fulfill.


P.S. This is my first novel. Comments and feedbacks are very welcome. I'm from Italy, so I'm constantly improving my writing skills.