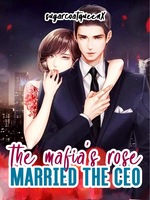 “For you, my wife, a rose as delicate and beautiful as you are. The world is your garden, I will make it so. Here, we will tend our love everyday. And I will slay anyone who dares come pick the flowers.”

Feng Xuan laughed at Qing Chen’s little letter and whispered to herself in answer, “No, my husband. It is I who will give us the world.”

After her mother’s death, Feng Xuan was sent overseas to continue her studies and was under strict instructions to never come home.

Feng Xuan had always known she was going to marry someone she did not love. That was why she was not surprised that when her father finally allowed her to come back, she was off to be married immediately.

Upon marrying the handsome, somewhat brooding but caring, Qing Chen, a hotelier and the new mafia boss on the side, Feng Xuan started to realize that she might not be the woman whom she thought she was.

There was only one condition that allowed Qing Chen to marry Feng Xuan: he is to keep her protected from the world, and from herself.

This is a story about a woman who uncovers the long buried details about her life, the society, the world, and her mother’s untimely death. Along the way, she discovers who she really is; smart, ruthless, cunning, and powerful.

WARNINGS: (If you comment anything about this, I will direct you to read these AGAIN)
1. This is a slow-paced story, because of this ROMANCE CAME LATE FOR THE LEADS. I'm saying this again, LATE. There's a huge reason behind this, if you will be patient you'd get there.
2. Male Lead is weak AT FIRST. As this story is slow-paced, character development took a while.
3. Female Lead will start to reawaken around Chapter 80 and ML will rise into his full potential shortly afterwards--once you start reading you'll know why it took this long.
4. This book is not just about the romance part, it is also has a lot of mystery and later on, action in it.

English is not my first language. Please do not hesitate to comment corrections regarding spelling and grammar. Thank you!

This is an original story.
The picture on the cover is not mine. Credits to the real owner.


Update schedule: One chapter a day.