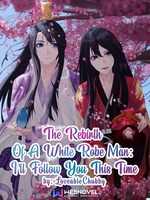 The Rebirth Of A White Robe Man: I'll Follow You This Time (BL)

When a wrong path is chosen, it isn't surprising to have a miserable ending.

At the moment of Shao Cheng dying at the hand of the people he treasured and loved his entire life, the greatest enemy of his was the one who has given him comfort and relief in his final moment.

Ren Yuan, an enchanting man, has gazed at him with a very deep peach blossom grey eyes which contain complicated and unknown emotion brimming within it before seemingly sighing in regret as he spoke with a soft and gentle voice, something that Shao Cheng will never think will happen between their interaction with each other.

After all, the two of them have been battling against each other.

"Before didn't I mention about how blind you are? Look at you now! Since you are so ignorant and stupid, next time, just ignored the other people and follow me alright? Base on our intertwined deep fate of being enemies in this life, I am sure that we will meet again in our next life!"

Usually, Shao Cheng would have become angry from this man's words alone, but at this moment, his lip couldn't help but show a breathtakingly beautiful smile, rather than his usual fake smile, this time his expression is true and came from his heart causing the usually overbearing man to show a dumbfounded expression seemingly stunned at what he was seeing.

"Alright, If I meet you again. I'll follow you this time."

While losing his consciousness, there seemed to be a soft brush touching his thin lip, before his entire vision became blank.

However, who would have thought that he will turn into a spirit after death, like those resentful ghosts that are unable to leave the Palace, thus capable enough to stalk around his former greatest enemy while learning new shocking information and secret about the man that he has never truly known.

And as Ren Yuan has finally taken his last breath, Shao Cheng has once again found himself waking up drowning in ice-cold water, a similar and familiar situation that he discovers himself after transmigrating in the ancient world the first time.

Later on, a beautiful young man with a cold expression on his handsome young face dressed in a snow-white robe follows behind an older exquisite young man dressed in a gorgeous crimson robe.

"Aren't you going home soon? How long are you going to keep following me around!?"

"Alright, alright! Just follow me! This Big Brother is powerful, so protecting a single person wouldn't be difficult!"

Instantly, Shao Cheng showed a beautiful bright smile, causing the older man dressed in crimson robe to be stunned before mumbling soft words that the young man in a white robe was able to hear but acted like
a deaf person.

"Damn, I really need to protect you or else, aren't you going to be taken advantage of later on by the bad guys?"

So a clueless and ignorant crimson robe young man let a wicked person follow along his side which he, later on, learned to have an abnormal ability.

I seemed to hear him talking to a bird?

Hey, why are you showing tender expression to a plant?

Book Cover Picture: I don't own it, the copyright belongs to its rightful owner
I search the image on Pinterest and google while changing a bit.