/ Contemporary Romance / (Un) Fortunately the Yandere is Not After Me 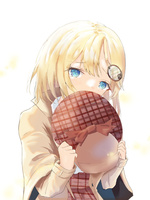 Arata Kashimura was hoping to have a normal, if lonely, high school life. He avoided others because he didn't want his secret to get out. That he was a massive otaku, something like that becoming known would be high school suicide. Knowing that, he was content with the only person he ever talked to being Yogi Aono, the boy that's sat beside him since entering high school.

But his life gets turned upside when Erina Hayama, a girl he's only ever seen in passing, reveals that she knows his secret. Now blackmailed to do her bidding, it turns out that she wants him to get Yogi to fall for her. Because she's crazy, really crazy in love with the boy.

But with other rivals vying for his love, doing so won't be so simple. Arata now finds himself in a harem, where he's not in the middle of it. Will he be able to come out on top and save his reputation, in this love comedy looking from the outside-in?

I have no clue who actually own this picture, nor who this is supposed to be.