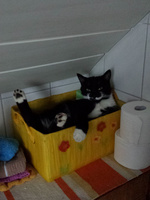 A veil of darkness had crawled over the world, and even the eon old stars could not contest the city's luminescence. It was a humid night, even worse in Winter's small room. Still, she laid curled up in her bed and finally cried as the neon lights from the other side of the street found its way inside. Below she heard her uncle and aunt argue, probably concerning her father's situation. She was about to lift her pillow and cover her ears with it when suddenly her phone lit up with a notification of an app she didn't remember installing.

Perplexed, Winter stared blankly at the LED screen, before--as if out of reflex, she opened the app. She waited, but nothing happened. There was no user interface, just a black screen. She wondered if this was part of another cyberattack, but right before she wanted to close the app, the screen turned white, and letters appeared one by one. The unknown app asked her one simple question.

"Do you want to change your life?"