/ Anime & Comics / The Mikaelsons in an Irregular World 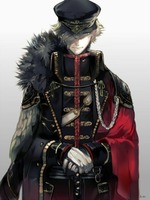 The Mikaelsons in an Irregular World Back from Dead

"We've all heard the legends, the first vampires. Their eternal vow. How they roamed the Earth a thousand years, saw empires rise and fall. To most, they were monsters, but to a few, they were something more. If you look closely, you'll find traces of them through history. They've got a bit of a reputation. After a thousand years, things can get complicated. Eventually, they were drawn back to a place they once called home, somewhat reluctantly. But they just couldn't resist New Orleans where the good times roll and the heads do too. It wasn't easy, but some things are worth fighting for. Some things you can't give up on, even when all hope is lost. Even when it seems like it's over; it's never over. Some things can't be broken. Every family has a legacy, and this is mine. I intend to fight for "Always and Forever", even if it destroys me."

The Youngest Mikaelson, Henrik is trapped inside an alternate world after being killed by the werewolves. His soul is bounded by strong magic which prevents him from aging, he is alone inside the alternate world with no living being present other than him.

The only thing keeping him from going insane is the fact that from this alternate world he can watch his family using the Esther bloodline as a link. Over the centuries he watches how his family lived, how they loved, how they hunted, how they hated, he saw it all.

Over the years, Henrik grew to crave the bond that his siblings had, the love and trust was the thing he wanted more than anything. So he made a plan, to escape his imprisonment he started absorbing more and more magic from his prison world. This world was not only his prison but also the source of his power.

Henrik had a special soul that caused his magic to grow stronger and stronger as he aged, this world constantly strengthened his soul so that his soul would become indestructible and handle his ever-growing magic. For a century he absorbed the magic around him and finally one day he was able to successfully escape from the prison world. He doesn't have a body thus he created one for him, seeing that wherever his family went trouble would always follow he decided to escape from the clutches of the spirits and be reborn in a new word.

A world that is different yet similar to the previous one at the same time. Now that he is back, he will claim what is rightfully his, he will have his family and he would do anything to achieve his goal.

[At least 4 chapters per week]

[Only constructive criticism is needed.]