The Last Spark of DarkFire - Fantasy

/ Fantasy / The Last Spark of DarkFire 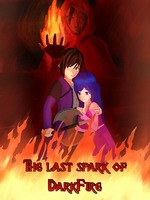 The Last Spark of DarkFire L.S.D.F

Without a warning, a race of powerful fire-controlling demons known as Flame fiends emerged from the darkest pits of the ground after continuous disasters had caused them to lose most of their population. Murdering hundreds of humans and burning down their dwellings, the fiends had advanced on their path of destruction all the way to one of the greatest kingdoms in the realm.

During the Flameground war that lasted over ten years, the armies all over the kingdom of Magmorika fought to the death against the Darkfire reapers, the flame fiend's strongest forces. After both sides suffered from serious casualties, the war was concluded by the total defeat of the Darkfire reapers and the extermination of all the fiends except for one who was rumored to have fled and had never been seen since then.

The story starts many years after the kingdom had fully healed the damage it suffered from the nightmare of the war, when Ryne, a 17-year-old mail-boy, meets a young woman named Sophilia whose actions lead him to lose his only livelihood. Soon, the girl actually shows kindness to him by helping him with his misfortune and eventually becoming friends with him.

But, not so long after Ryne had met that girl, another nightmare had begun: the lost devil had finally reappeared. Along with Sophilia and other allies, Ryne struggles to uncover the secrets behind the last Darkfire Reaper.

Why did the devil decide to appear, even though he is the last of his kind?

Why is he going after Ryne and his friends, even though none of them had any connections with his past?

What new schemes is he forging in the darkness, even though the war had long ago ended by his defeat?