In Library Add to Library
sign in
16.66% Reincarnated into the Anime World with a System! / Chapter 1: Hey Readers! 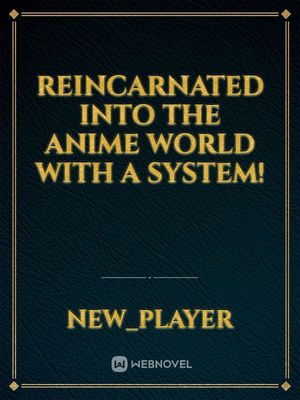 Reincarnated into the Anime World with a System!

Hi dear readers, before we jump into the story I want to put it out there that I can get a little dark sometimes and that I'm new to writing stories so don't be to hard.

The MC won't start of being OP because I won't allow it under my jurisdiction😤; Basically the MC dies and is reincarnated, with and you guest it, a System which will assist him in all of his needs. I try to make everything make sense so that there is no misunderstandings, but plz help me out if theirs a typo or a flat out mistake on my part which I'll try to correct the best of my abilities. The story will contain things like romance(erotic scenes like Highschool DxD😏), bloody scenes(my favorite), and all and all complete utter dominance. Also, to make sure I'm being clear on this let me say it again; I'm new at this so don't be toxic(I know as I type this people are going to be toxic still😑.

I'll explain real quick the scenario and details of the story down below so you know what your in for:

Status: not explaining for obvious reasons

Store:let's the host by anything from any anime they watched or any manganese they may have read, but has some other a tuff that I just through in there for the story

Inventory: I'm not explaining this to anyone because I know you all know what this is😑

Quest Board: shows quests that the host can except that don't need to be triggered and can sometimes have events like the ones in Logres(I MISS THIS GAME SO MUCH!😭)

Recycling/Synthesizing: the host can recycle weapons to enhance other weapons which will loom something like this: (Black Knight Great sword +1). This also works on skills, but instead combines them to create something else; the only problem is that if in fails both skills will be lost.

System Store Currency- I'll either make it regular points or tokens with rarities such as: Common Token, Uncommon Token, Rare Token, Epic Token, Unique Token, Legendary Token and Myth Token to be precise. I'll let you guys vote on either Points or Tokens!

Skill Mastery- (in order)Beginner, Basic, Intermediate, Advance, Expert, Master and Saint; I'm open to the idea of changing this to letters to make my life easier if you guys/girls want!

Magic Arts Reward Box: will contain a random magic that will be ranked based on the same system ranking system as the tickets

Ability Mystery Box: gives a random ability and has the same ranking system for its skills as the tickets'

Besides that the MC will be given 6 wishes that I obviously abused the hell out of and before I sign off do you want me to make through MC Op or grows to become OP.