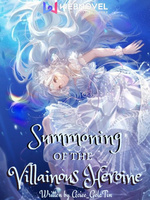 Summoning of the Villainous Heroine SOTVH

"Where a bookworm's love for reading, fused with a little touch of magic, gives birth to a half-heroine and half-villainess protagonist...."

Grey hair, thick glasses and a gloomy appearance overall - though an outstanding student, everyone steers clear of Angelica "Eli" Claes. Unable to make friends due to her nerdy mien, Eli often drowns herself in the world of fiction and immerses most of her time in the company of books.

Never had she imagined that she'd also get to be in the company of a group of gentlemen who're just too perfect and attractive to be considered 'non-fiction'. With the appearance of this ever popular Student Council at her precious oasis, trouble leads to another. The most befuddling thing is when she gained the memories of the antagonist in a fantasy novel she'd been reading - a villainous empress who fell on her own blade, Venus. Ever since, she found herself causing troubles to the esteemed Student Council instead -

Enter the perfect Student Council President who's all smiles and sparkles, the charming and blithesome Vice President, the gallant Public Information Officer known for being a social butterfly, and a certain classmate of hers sought by every Sports Club at school yet chose to work as a library assistant instead?

Little did the bookworm know that these people aren't really who they appear to be.

As magical creatures began to crop up in the prestigious institution of Canaan Private Academy, supernatural occurrences were sure to follow. Along with that is the appearance of these mysterious figures who vowed to protect the school from the shadows - a gun-wielder with royal blood, a knight in crimson armor, a genius duke, and an information handler nobleman.

But then came the woman who ruined their lives before. Returning for vengeance was the most dreaded queen of all. Beneath a new identity, she schemed doom and strived for their downfall.

A persona split into half - just what kind of royal pain is she about to cause this time around?

Join the bookworm's exhilarating journey of living a heroine's life while possessed by a certain villainess.