Read Serendipity - A wink from the fate - Chapter 1 online 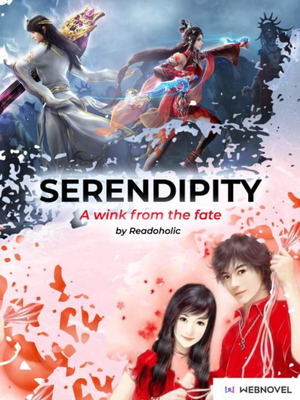 Serendipity - A wink from the fate

(Somewhere in the woods.)

It was daytime, but the heavens were riddled with stormy clouds, swallowing the earth in darkness.

The rain violently lashed down on the rooftops and the heavy winds made the tree branches dance.

All of a sudden, a bolt of lightning tore across the sky, and a peal of thunder shortly followed. The swishing sounds of blades being wielded were reverberating in the surroundings, along with the pitter-patter rhythm of raindrops that gave an illusion in the warzone.

A figure, wearing a red attire, dashed from the nearby tree and landed on the blood-covered ground.

Golden embroidery was creasing the hemline of her attire - It was enhancing the beauty of the red robe she had worn, perfectly wrapping around her tall slender figure.

The wispy bangs on her forehead were dripping wet due to the rain, letting the water droplets crawl over the nose bridge down to her slightly parted red lips.

Gripping thin sword blades in both of her hands, HuaMo: the Blade Lady, looked like a war princess full of vengeance and pride. Her almond eyes filled with fury were focused on the target, smiling maliciously, standing on the opposite side of her.

She closed her eyes for a moment and inhaled deeply with her nose. Holding her breath for a few seconds, she formed an o-shape with her lips, exhaling slowly like she was gathering the energy she invested previously while jumping from the tree.

She squinted her eyes at her target, and with a loud huff, she bolted towards the haggard figure standing directly in front of her.

Her opponent was known as the Immortal Fox: Evil Boss of top 4th Level. He was not only one of the most difficult to kill bosses in the top levels, but also possessed the most devilish power of self-healing and ability to kill the opponent with hypnotism.

Right now, the evil boss had a pale face, and his body was covered with deep cuts. His breathing was erratic and irregular - It was one on the verge of collapsing. The previous intense fight with HuaMo had drained his energy rapidly, leaving him shattered with her continuous strong attacks.

Previously the ranked #1 player, YanXu was able to successfully defeat him. That was the only time he had lost, as YanXu was considered as the immortal legend of the game. No one escaped from the legend in his one year of active playing.

But now, the war princess in front of him was raging with anger. She was ready to attack him with her mostly deadly weapon 'Fire Dragon', which was famous in burning and killing the opponent within a few seconds, giving no opportunity to fight back or attack.

In the blink of an eye, a red-orange hue was painted on the sky, lighting it up like a picture of the evening sunset view. However, the eerily calm surroundings were disturbing that illusion.

A winged dragon emerged from the swooshing sounds created by Hua Mo's blades. It was a dragon with flames emitting immense heat, terrorising the person who it will be directed to.

With a heavy jerk, she directed that fire dragon towards the evil boss.

Seeing the fire dragon flying towards him in an attacking stance, Immortal Fox tried to create a defensive layer around him. Arrows left from his bow started to move speedily towards HuaMo. She was jumping like a spring dodging all attacks pointed towards her.

After realising that it was too late, his face turned blanched white as if blood was drained completely from his malicious face, and he stood in horror, staring at the dragon leaping closer to him inch by inch.

Next moment, the dragon hovered over him and made a growling sound. It was ear piercing as a loud screech followed it.

Immortal Fox was engulfed in its flames. He was struggling hard to survive with all the flames around him, which were rising every moment. He tried to use his mind power to self heal himself, but the scorching heat from the high flames was distracting his focus to overcome the pain.

HuaMo was watching the death of Immortal Fox in delight. She was disappointed initially as she thought he was defeated so easily. She expected Immortal Fox to be a hard kill.

After a few more moments of struggle, his body was turned into grey ash, wiped out by air the next moment. He was killed by the war princess.

As he was departing, his voice echoed through the sky, "I shall sleep... and dream about destruction."

Suddenly, the stormy weather changed to a spring day morning which symbolised the birth of a new life. The sun shone brightly along with the sounds of birds chirping around. The pond nearby was bathed in a golden hue by the gentle sunlight, and the water was clear as crystal.

Many gifts were displayed on the screen after the successful kill executed by HuaMo. Many congratulatory wishes were showered upon her in the server chat rooms.

There were some people praising her for her tactics and bravery while others mocked her for being overbearing.

"HuaMo was fiery as always".

"Haah... What's there to be so proud of? Even we can defeat the Immortal Fox."

"I think HuaMo is a male player."

HuaMo was unfazed by all the criticism and compliments that were gracing over her in the chat room. She was in her small bubble of happiness, which was caused by her latest kill.

Mo Hua had been playing the role of the character HuaMo in 'Legends of Nanshan' game for almost 6 months now, but her expertise was unfathomable.

She was ranked 6th and was the only female player with extraordinary weapons and skills in the top 10 of the most popular server – RisingBlade. She was also considered as an alluring lady with a ferocious nature, gifted with the most beautiful features.

While collecting all the gifts, a beautiful smile appeared on her overjoyed face, carving dimples on both of her cheeks. She had soft features unlike her character HuaMo in the game.

With pointed nose and perky lips, she had almond eyes having a shade close to deep brown and long curled eyelashes adding more beauty to her gentle face.

She seemed a tremendously gorgeous person with her long straight hair and thin figure with perfect proportions. She was dressed up in a blue denim jumpsuit and white cat print t-shirt. Her appearance was somewhat fragile.

Mo Hua was a junior year student of the Computer Science Department in Beijing University.

After logging off from the game and shutting her laptop down, Mo Hua rushed out of her dorm to catch up with her dorm-mates who were on their way to the department building for the upcoming vocational subject lecture.

"Xixi, wait for me." Mo Hua tried to stop Xixi who increased her pace after seeing Mo Hua running towards her.

She initially wanted Mo Hua to attend the swimming class with her in the morning.

But unfortunately for her, Mo Hua had wasted another morning engrossed in her laptop, playing the game as usual.

She wanted to enjoy the view of handsome seniors in swimming trunks, swimming around the wide infinity pool like the Gods of water. But by virtue of Mo Hua's game addiction, she spent her morning lying in bed, waiting for Mo Hua to finish her game.

Looking at Xixi's irritated expression, Mo Hua glanced at her with a loving smile.

While pinching her baby cheeks with her slender white fingers, she said, "Dear Xixi, I am really sorry for today. I lost the track of time and forgot to accompany you to swimming lessons."

She deliberately tried to hide the fact that she didn't forget about that, but was too much occupied by the game. She knew that would annoy Xixi more.

Xixi shrugged her arm, which was being grabbed by Mo Hua, and said disappointingly, "You didn't forget, I know. You are so obsessed and completely occupied with your game all the time that you are left with no time to spend with us."

With a pleading expression and a puppy face, Mo Hua tried to coax Xixi.

She said, "I promise Xixi, after this lecture, we will surely go to the swimming contest organised by the University. Will that work?".

After staring at Mo Hua's face for a while, trying to find any hints of lies, Xixi came to a conclusion that her friend was being honest and sincere about tagging along to the swimming contest after the lecture.

She started jumping in joy inwardly.

Although she was no longer angry, she still kept pouting her face purposely which was recognized by Mo Hua immediately.

She smirked at Li Mei and Xi Mian, other dormmates and friends of Mo Hua and Xixi, who were walking with them along the way.

With some eye messages exchanged among the three friends, they teamed up and started tickling Xixi.

Peals of laughter left XixI's mouth, and she suddenly started to struggle her way out. The sound of giggles was filling the hallway of the building, making the people around the four beautiful girls mesmerized by their radiant faces.

Girls Dormitory was located at the farther end of the department building, so Mo Hua and her group had to take a twenty-minute walk to reach the location. After settling the mood of Xixi, they decided to speed up their way to the lecture hall.

On the way, Mo Hua was busy looking at her mobile, reading the update of the upcoming swimming tournament held in her University.

Although, while she was rushing into her lecture hall, she abruptly bumped into a hard surface.

"Oww" She yelped lightly in pain, rubbing her forehead but with closed eyes.

As she was about to raise her head, a reminder from her mobile started ringing, telling her that she was extremely late for the class. Thus, without glancing at what she bumped herself into, she dashed past the figure who was looking at her in utter surprise.

PLEASE keep going through the book to find out what happens next? What was the thing MO HUA bumped into?

Was it something good or bad for her?

So Keep Reading and Keep Supporting and add this book to your library and enjoy the love story further..!