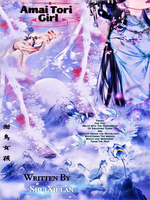 "In the 1st century, I kept on standing at the peak of that fated glacier... Unable to sleep whether day or night... I watched as the snow-covered other mountains. Just then I was swept by an invisible stream of air... I saw her to give up struggling, just letting herself sink into the bottom of the water, like countless cold knives splitting open her skin... I flew to her... But it was too late to look back... She said with a fainted smile, "There may be love but a happy ending may be hard to come by. " It was my fault... Her calamity was my doing... I wasn't afraid of destroying my spirit... But she told me to live well... She sacrificed herself for me...

In the 10th century, I saw her again... The clouds remained undispersed, the rain continued to fall, debts and grievances remained unpaid... "

Alale Xuexue, a half-blood from the water realm because of destiny was born in the mortal world. There she lived as Sarina Takamine Juri, the younger child of a sweet family. When she reached to her youth, she fell in love with her childhood friend, with the neighborhood boy, Jinray Kyosuke. He was also unaware like Juri that he was not a human being. He was the son of the emperor of a planet named NEXUS MIRROR. Though his father was a human, his mother was an immortal, a Dragon immortal. So, he was born as a 3/4 immortal. His mother named him Liao Danyi when he was born. But he was separated from his parents, just because of FATE.
The rulers of NEXUS MIRROR befriended with the Demon lord named AFLATUNKA for a purpose. The demon lord wanted to vanish Earth. Only an earth-women was destined to kill that demon. It was Allalei Xuexue aka Sarina Takamine Juri.
Because of collusion, Jinray Kyosuke turned into dark and became her rival in the real extensive conflict.