Reviews of After Transmigrating as a Demon, I've Been Adopted by Angels! - Page 1 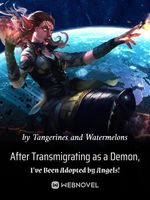 After Transmigrating as a Demon, I've Been Adopted by Angels!

Should change the name to "My cute angels can't be this Xianxia" or "The elders in my sect are named after angels". Or the usual "Everyone behaves like xianxia character".
2d
view 0 replies

Author or Translator please fix [Angel/Demon Rankings] it gets confusing as chapters goes on. If it continues..., well you know it'll drop.
6d
view 0 replies

translation is bad. I'ts possible to understand it, but its clear its machine translated and edited. I'ts one of the better machine edits though, ill give it that. The plot and story isent too bad but nothing special. Not special enough to bother reading this edited machine translation.
6d
view 0 replies

Sound interesting but is it worth reading?????
7d
view 0 replies

It's a bot using MTL and claiming someone human translated this, I am sure of it
7d
view 1 replies

hmm... the story is unique and the grammars are good too. The world background is interesting and the MC is rational in some ways bkajahsjajwieu
15d
view 0 replies

Read the raw to around chapter 50~ and it’s already very boring. Spoilers head So that fallen angel chick he has enslaved is actually the daughter of Lucifer. His childhood friend turned out to be some super powerful war angel on more powerful then the seraphim. There was this goddess chick that destroyed a world willing became MC’s slave. His foster mother turned out to be some ancient super weapon designed to kill super god, a god that’s more powerful than the god of light and dark. There also this half dead angel whose sole fragments he absorbed became his master, which I strongly suspects would also join his harem at some point. At the point where I dropped the book MC is aready killing demon emperors. At Chapter 50~! And only a few years since he was born! So many coincidence in such a short amount of time crammed to tightly at a single point is this novels flaw.
18d
view 0 replies

Meh, just meh, it has a very insipid development and is something interesting but meh. Fill, fill
25d
view 0 replies

Hurry up and choose this work already. We need more. Yall holding back my reading. All this waiting is unbearable. I already caught up 10 minutes ago. How much longer will yall make me wait.
29d
view 1 replies

Overall a really good story. I'm etching to discover more about what will happen next. The character is op and not stupid, 40 chapter so far but far from enough to satisfy me. Please get picked and continued!
1mth
view 0 replies

i like the theme of this novel... having a op mc.. but he is making the hero strong too quickly without doing much... so ii hope either there will be more strong people coming... or this novel will be too short
1mth
view 0 replies

not so good but interesting 🤠 thnx author but different thing you have choosed with story back ground buy i think something is overpowered in it...
1mth
view 0 replies

At chapter 35, I have to say it seems interesting. it will depend on the future plot and on the mc's life and his actions. Hope, we learn more about his past and maybe he would act more.
1mth
view 0 replies