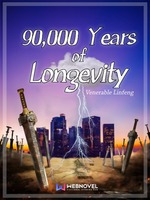 He once separated heaven and earth with Pangu, created humans with Nüwa, and explained Buddhism with Tathagata.

Once filled the sea with Jingwei, saved Chenxiang’s mother with Chenxiang, and tasted poison with Shen Nong.

The Taoist Trinity was his disciple, the Jade Emperor worshipped him as the godfather, and Jesus and Odin respected him as the ancestor.

He was drunk with the Dragon King for three days and three nights, and he also witnessed the graceful beauty of Chang'e flying to the moon.

He once saw the stone popped out the Monkey King, and also once burned the Book of Life and Death.

He was a man, a god, wind, rain, and a demon. He knew the past life and knew the future...

In this way, Ye Bei lived for 90,000 years! Looking for the mystery of longevity in the endless years...

I used my 7 years of learning Chinese(Literature) in this story, poems are not my own, the quote or proverbs at the end of each Author's Note were taken out from google, and note that those quotes don't have its specific creator, they are mostly from random 'Learned People'. In case it has its specific creator, I will mention him.

Warning: My story’s initial arcs do not focus on action much. The MC actually lost some of his memory, so he needed to collect all the relics that have his memory of which he sealed it in them. In the long run chapters in the future, he will find a reason why the legendary myth characters of the past disappeared from the earth. If you can’t endure my style of writing and my story, then this book is not for you, and if you wanna leave a rating, please leave reasonable ones with constructive criticism/review. Don’t leave a review just because my story makes you frustrated, thanks for understanding.

# Strong From the Start