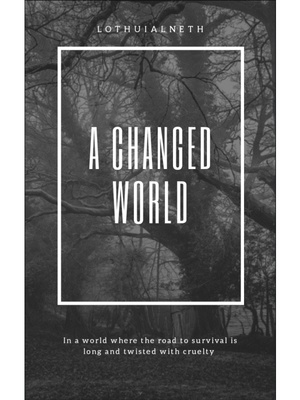 APPEARANCE: has pale blue, shoulder length hair with faded white ends. Bright green eyes that have a slight point when she isn't wearing a poker face. Moderately tanned skin and freckles bordering her nose and below her eyes. Usually wears ripped jeans, a crop top and a leather jacket, along with black leather, fingerless gloves and white trainers. She has a belt that it around her waist but sits on a slant due to her having a katana and a sheath tied to her side.

PERSONALITY: doesn't really care about much. Doesn't usually speak out unless it's really necessary, but when her opinion is asked for then she will voice it. She is not too smart but not dumb, really strong and knows how to read the situation and find a solution pretty well.

SKILLS: trained in sword fighting and strategy. Grew up doing gymnastics and martial arts so she's a really good fighter and a light footed survivor.

STARTING POSITION: just moved to America and is getting ready to meet her new classmates.

PERSONALITY: hates rules, mostly breaks them. Talkative, likes to lighten the mood in the area and can read people very well. Can be smart when he really needs to be. Likes to play video games and football (soccer).

SKILLS: has good stamina, understands the worlds situation and survives off his video game knowledge.

APPEARANCE: pure white hair, blue eyes and really tanned skin. Has a thick british accent. Wears his uniform but in a very messy state, his blazer sleeves are rolled up to his elbows, the top five buttons are usually unbuttoned to show his white vest shirt underneath.

PERSONALITY: avoids being with big groups, is in a group of thugs. Plays a lot of baseball and does a lot of fist fighting.

SKILLS: fighter, strong and can swing a bat leathally.

APPEARANCE: blonde cropped hair and blue eyes. Pale skin. wears her pe shorts and white shirt along with her jersey.

PERSONALITY: a musician and dancer, feels "the flow of music" through everything and everyone around her. People don't really like her shy personality but they love her dancing. Quite dumb and could probably get people killed with her dumbness.

PERSONALITY: musician who loves her piano, she's always doodling in class and is quite popular amongst her peers. She's very friendly and makes sure people don't start fighting in her school. Welcomes new students with open arms.

SKILLS: pianist and artist who can resolve conflicts.

APPEARANCE: black hair, brown eyes. Wears a perfect and neat uniform along with an expensive watch.

PERSONALITY: he is from an incredibly rich family and doesn't care much about it, he is a techno genius and can fix anything that is broken. Although he seems nerdy, he is just intelligent and knows how to survive with his money, skills and incredibly good looks.

STARTING POSITION: in his family limo on the way to another day in his extremely rich private school.

APPEARANCE: dirty blonde hair that often has a hat sat on it (backwards) emerald green eyes and a lightly tanned skin. Is always wearing sports shorts, shirts and hoodies, along with firm trainers.

PERSONALITY: quiet (most of the time), voices his opinion a lot and doesn't care if he hurts someone as long as his point is put across. He rarely apologises, but when he does, he genuinely feels guilty and wants to resolve whatever he did. He plays a lot of basketball and does a lot of archery.

STARTING POSITION: in the heads office for a strict lecture on what he has said to an underclassman.

Welcome to the land of zombies!

I am warning now - there may be some swearing involved and definitely vivid descriptions of gory and gruesome scenes.

Read on knowing these things and don't complain after I have, indeed, warned you in advance.

Also, I'm British so... ignore some spellings that may not be under what or how you spell it - e.g./ football / soccer, colour / color.