A Demon Of An Angel - Contemporary Romance

/ Contemporary Romance / A Demon Of An Angel 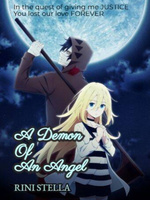 A Demon Of An Angel

The small world of Sitara's consists of her mother Sonali, her Dida, Kantha Tai, and her friends. Singing and dancing are her only solace. Her life took a 360 turn when a hail storm called Sidhanth entered her life and destroyed her, completely. She can't remember how happy she was before his entry.
Sidhanth entered her life with only one motive that is to destroy Sitara inch by inch. He has a dark past attached to his life that no one knew about except his father Ram and Bade Papa Durga prasad.
Sitara is the only answer to all of the questions he has in his life.

Sidhanth looked straight into the eyes of Sitara, whose eyes are filled with disbelief. This guy has the guts to drag her to a temple and ask her to marry him. Just a day before, her marriage got canceled, and he wants her to step inside the same household. Where her sister resides as the bride of her ex-fiance.

"You are impossible, Sidhanth. And by the way, if I have to marry, you will not be even my last choice. Stop your drama, and let me live peacefully. Already I have gone through so much because of you and your family. I am not ready to face any more humiliation." Sitara spat and turned around only to see a well-built lady wearing a black and black uniform blocking her way. She tried to go the other way, but the lady again stood in her way.

"Excuse me, move aside."

"Marry me, Sitara. Then you can leave the temple with me,"

"In your dreams, Mr. Maheshwari."

"It's Sidhanth, for you. I never dream, Sitara. I turn the dreams of others into reality. My reality. That is Sidhanth's style." His proud smirk told the arrogance and pride he has been filled with.

He is a demon.

She is an angel.

In this game of destiny, can this demon win the angel over?