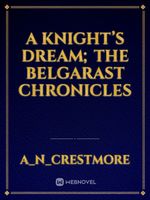 A Knight’s Dream; The Belgarast Chronicles

Within the Cindielium Confederacy, in the Barony of Ganador, Prince Willum Cindiel (27) has arrived to be remarried to a new woman, Charlotte Ganador (23), the Baron’s daughter. He is not interested in her, though he doesn’t have a choice. Sir Belgarast (20), a recently promoted knight, loathes their betrothal; seeing himself to be the better match for her. Though such a romance would be impossible and he knows it.
One night as Belgarast is on patrol, a hideous beast with the aspects of a goat and a humanoid kidnaps Charlotte and passes in front of him by chance. He leaves straight away and decides not to waste time meeting with the Baron and his comrades to organize a rescue. This goes against everything he’s learned; following orders, deferring to his superiors. The tenets of his Oath of Fealty.
He runs into the forest, encountering challenges and opposition from goblins and trolls. He finds the beast’s lair in an ancient ruin; a tomb from Cindielium’s ancestor kingdoms.
For the cost of his honour and life as he knows it, will he be able to rescue Charlotte, the woman of his obsession? Or will the beast be able to do whatever horrid thing it wanted to her?

Dedicated to my love; Rachel.