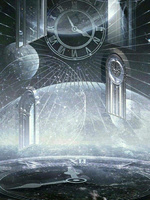 Before rebirth could see the future After rebirth has to save the future.

with neither luck nor will he keeps doing this as a part of a deal with Gods.

out of nowhere has so many underlings with a weird guy kissing him before he faints causing him to curse whenever he sees him and gods.

The Gods always ditch him on important times and he decides to change the world view for him to live easily...but

Now have to find some unknown world core and dump it into its proper place.


After going through so many troubles to make things right he always ends up making something wrong unknowingly.


The story is about how an abandoned world will be saved and loved by all. For which many changes were done by Mc and his team.

With angels and devils constantly making more trouble and eradicating monsters, changing emperors. In the end, MC will find a solution on how to live a loner's life by making His own domains.

With many unusual problems like luck, strength, curses, family, friends, followers, lazy gods, and love ...well he has many others too, Loir Von goldhide marches towards his goal at full speed

Fun, Drama, Romance, Different side story and many fantasy creatures adding to the life of a loner MC making it a crazy life.

The front page is not mine. Sorry for using it without perms.

Our MC Loir
and ML Seiji with much other support characters in it.