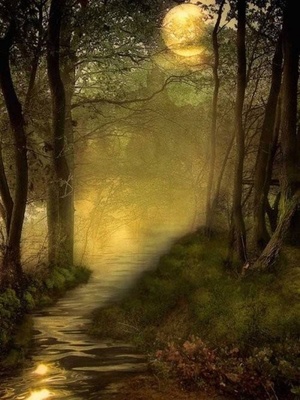 I still had to ask, those so-called peers of mine have a tendency to play with words if you leave it for interpretation, so checking everything is a must with those guys "Are you sure this is what you intend to do? If you want to change the rules of our game at this time isn't it the same as accepting your loss?"

The ones sitting in front of me are all long-term acquaintances or friends of mine, who joined together in a game which started a bit over a thousand years ago. It was then that I decided to play as well. Life up here can be quite boring sometimes.

While they appear calm and do not show much reaction on their faces, well those who have it, it is quite easy to guess what they might feel on the inside. Losing to the one you thought would be the easiest opponent may not feel good for them, but why should I care.

It was about time for my chosen ones to show some results, and I must say, they also surprised me with their efficacity. It was less than 5 years from my intervention and my chosen one was able to make those gods taste defeat like they haven't in as much as our thousand-year-old game.

"It is as I said, we are changing the rules of the game so it gets more fair play and have all of them share the same probability of success to win. This was something we said during the game creation phase so it is still within the rules for us to do so."

"While I am certain that it is true, before you do that, why not verify something with me. Didn't we also put a rule, that unless an unforeseen circumstance came into play we didn't have the power to change those rules as well?"

It was indeed so. That is why he is unable to change anything that I say, or work to change the rules of the game. Until some time ago it is. This time it seems they have come prepared and looks like almost all of them are in favor of changing the rules.

"That is true as well. I am sure we remember a rule like that being added, but to tip the scales of the games going on for more than a thousand years in just half a decade, doesn't that make things a bit weird?"

Now it was another person who spoke, one that looks almost like a normal human in appearance but also not so. One that my people down there are referring as demons, which is quite a term to come up with for one of the 'superior' races of the universe, hahaha.

"There is nothing strange with that, we agreed before that the longer we took to help our chosen ones the higher the help we could give. What did I do wrong? I only took one man and aided him a little some time later with the magic system that was from the start of our game. There is no need to beat around the bush, if you can find a fault with that, then I am will be more than willing to change the rules for a much more enjoyable game. But until then, I am having quite a good time with this show, let's enjoy it together." Hehe, don't know why they are getting such ugly looks on their faces now, was it my words or my ear to ear smile, hahaha.

"Haa... Very well, then what do you think about adding one chaos stone into the mix? It may not be quite as valuable as all our previous bets we used, but it is 3 times what you gave in for the bet before?" This time it is her who is shown a big smile like she knows I will accept this deal. But... a chaos stone huh. They are even willing to use this as a bet for a game. They are indeed one of the first races to become strong enough to have gods, their resources are much bigger than ours.

"If you are willing to gift me such a precious stone, why use it as a bet. Noone will think of anything strange even if you do give it to me, you are a nice girl, while I am quite a handsome god myself, girls sometimes do gift the men they like. Don't worry, I won't think badly of you. In fact, I even like bold girls hehe."

"You couldn't resist showing your true face, could you? So, what is your answer, while it may not matter much, being a daring man suits a god better, we didn't get here by idling around, in the end, this is still a game, just for entertainment. Our real focus is still our training. Are you man enough to try and win this chaos stone, or are you gonna be satisfied with what you may gain with the current game?"

Hehehe, not what I may gain, what I will. We all know you underestimated my race too much, thinking to make a game lasting for quite a long time, making all those rules and limitations and still failing before a race you view as weak. It is true that we came up into godhood later than you 'superior' races, but it is indeed that time that allowed us to work harder and use our knowledge and talent to be able to stand in front of you as peers. Too bad greed and envy is still a human thing, but then again, everyone has that.

"Would you look at that, we aren't even dating but you are still finding faults with me. Ah, I am such a loveable person, don't worry keep working hard and we may end up together one day! Ahh, you look even more loveable with that angry look on your face, you are making my heart beat so wild. Time out, time out."

"It may work, it may not. It all depends on how much of a change you are suggesting for our game. Please, fill me in."

"So, what is your answer? All we do is change the system governing the game a bit, and give more rewards to them. Still, your side will also benefit from this, so it is fair for all of them."

While pondering this matter for a bit, the other side is waiting for my answer. Still, I don't make them wait long as it has one big problem.

"On the surface, it does indeed seem so, but we all know that mankind is a bit weaker on the talent side, so it may not be quite fair with just those changes." While it is true that there are always some people who are stronger than the rest, have more talent and room for growth, like those witches they have down there, it is also quite easy to find people with little to medium talent, while their side has medium-high grade talent appearing quite consistently.

"Hoo... By your words, you seem to be suggesting you aren't fully against those changes? Tell us then, what kind of unreasonable request it is." Damn, that shit-eating grin again, I just wish I could punch him in the face right now.

"I never make any unreasonable requests, why do you say so my dear?"

"Uuu, someone is angry. Heh, well then, all I ask is to be able to choose another person to enter the game at this point, a person from any world that I like, and we have a fair deal."

Only one person? ... It may be a high talent human, no quite possibly a peak talent one, but still, what differences would it make. As long as we remove their advantage of technology with faster to reach higher ranks, we would be able to make our race evolve quite fast. Even if that person may be an abnormal human, it is still a risk that can be taken. Still...

"If you are thinking to negotiate the terms, it isn't possible. You can only choose to accept it or not. I know that the request is in the acceptable range, so it doesn't matter that much." While it is rare for a peak talent to come even in their side, being able to have one right now and let her grow would make us have a bit of leeway.

"Hmmph." looking at the rest of the gods, they also seem to understand why he did this, but it is still acceptable. "Shall we start then?"

Nodding, I reply "We can start."

In Neverwinter, a little past midnight, Roland is woken up from his dreams. On his left side, Anna still laying in bed seems to have felt something as well as she opens her eyes at almost the same time as him. While he would usually kiss her in this situation, tonight, it feels like something isn't quite right, he seems a bit absentminded.

Feeling the right side of the bed empty, he puts some light clothes over, and checks around until he spots what he was looking for by the window.

Nightingale, which would rarely be seen without her characteristic smile those days is looking with brows furrowed at the night sky.

"Did you feel something as well?"

"It feels almost like the time when I became a witch, the first night " completes Anna from the side.

"Yes, that's it. But why would it do that? We have passed that long ago, even the Day of Adulthood didn't make such a thing"

Seeing them worry but not having an answer, I was just going to say to them not to think much of it and ask the other witches tomorrow morning, when... I heard it, a mysterious voice resounding in all heaven and earth, the voice that signified man and gods would be ever closer, talking in a language that seemed foreign and not humanly possible but still understood by all lives.

And the last thing I remembered is seeing Anna and Nightingale losing consciousness one after the other, while I followed after them soon after. The world we knew, would never be the same ever again.

Hello everyone, and thanks for reading my novel.

This is only my first chapter for the day and I will be releasing more later today.

To help this novel grow, the early stages are very important and I hope you can be one of the people I will be able to remember even in the long term as a good fan and friend of this novel and mine.

Please let me know what you thought of it, comment, give it a review, share it with friends, give it some power stones, any help is greatly appreciated. :)