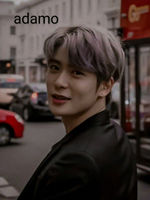 He was leaving without telling her before,again.

She relaxed her face and let out a sigh.

She got up from her chair and walked down the stairs.

"I see you again in a few days" he said and smiled.

She nodded and they gave each other a hug.

As soon as he walked out the door she walked back to her room.

She stopped asking where he was going for his business travels because she wasn't satisfied with the answers.

She was seven when her mom left them and her dad nearly abandoned her.

It was a story he liked to tell at one of those business dinners where they would sit and drink together.

She wasn't comfortable with this story at all.

And she didn't like him to tell ,she was embarrassed of it.

Sometimes when they fought and were mad at each other he would yell at her and say that he could still do what he hasn't done,she immediately knew what this meant.

And each time it reminded her of how unloved she was.

He would always come back to her and apologize in a soft voice and when she was younger she would always forgive him,she would have forgave him anything for a piece of candy.

And sometimes she would caught herself hating him for those words,she forgave but never forgot.

She sat down on her desk and looked at her homework,she really didn't want to do it.

She was tired,but not sleepy tired,she was just tired sort of unmotivated.

So she just sat there for a while,in front of her assignments and thought about how much she didn't want to do it.

Again she got up and walked to her bed,took her phone and layed down.

'Just for a short while' she told herself,deep inside she knew it was a lie.

Her father was working a lot,she wasn't sure if he did so for the money or because he wanted some space from her.

She would understand and wouldn't mind either.

Everyone that knew her mother used to tell her how she exactly looked like her,she just wished her father would know that she wasn't exactly like her mother.

She and her dad never talked much.

She explained his behavior to herself by saying he's still mad at her mother for leaving him with a baby.

Cho-Hee was actually scared that he just didn't love her for the person she is by herself,it was easier to put the blame on someone else especially when she didn't knew this someone and this someone left her.

She read a lot about mothers in books,all sort of mothers.

The evil step-mothers, the lovely ones,the evil biological mother and the caring ones.

Her's was none of them, her's never existed.

As she was scrolling to her phone she saw a video of a website that is supposed to be able to summon demons.

She never searched in any way for something like that,why did she get it recommended?

It was so funny to her that she opened the website.

Again she laughed,this was just so childish.

But why not try? It would be a funny story to tell.

With chalk she drew the Baphomet-symbol on a black paper and on every end it the star she set up a candle and lit them.

In the following step she would have to cut in her finger and let the blood drop on the symbol.

She paused. Was she really going to hurt herself for such a stupid thing?

A injury like that would probably be annoying and it probably wasn't even worth it.

But who was gonna stop her anyway?

She took a deep breath before slicing the scissors sharp side with a fast and pressured movement over her hand.

A bit blood fell down on the paper.

She looked down to the paper next to her where she wrote down the words in latin she had to say to 'fullfil' the ritual.

What did she even expect?

She expected nothing but her expectations were still to high.

She got up and looked at her bloody hand in disgust.

While standing up she accidentally kicked one of the candles and set the black paper on fire.

She stepped back in shock.

For a moment Cho-Hee panicked but she then remembered that she doesn't have a carpet and noting near that would start burning too and so she decided to just let it burn and prevent a bigger mess.

It didn't take the paper long to burn out and so she opened the window in her room and cleaned the mess up.

While cleaning she looked at her hand again,she forgot to take care of it because of the small fire in her room.

Right after she was done cleaning she walked straight to the bathroom.

She let the cold water run over her hand right away.

"I'm so stupid." She said to herself.

"Thinking this ritual would really do something.." she looked up in the mirror.

Right behind the shower curtains was a shadow and she turned around.

It was still there when she did so and as fast as she could she ripped the curtain aside and ignored her heart that pounded so hard against her chest that she heard her heartbeat and felt it with her feet.

Behind the curtain was nothing.

'Thats what they get you with' she thought, 'you only scare yourself'.

As she turned around a face directly stared at her and her eyes met red ones.

Hi and welcome to this, honestly pretty weird, jaehyun fanfiction

this is my second english ff and as i already said in the first one,english isn't my first language but I'm trying to improve it as good as possible so don't be shy to correct me I'm actually pretty thankful for it

I hope you enjoyed it so far and will stay by Cho-Hee's side throughout the story,tysm for reading it!!