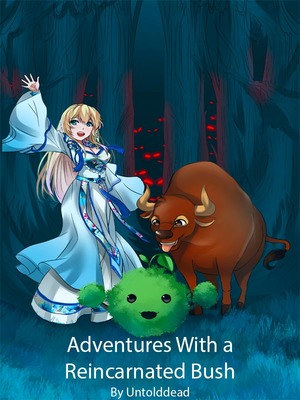 Adventures With a Reincarnated Bush

Chapter 1: Well I Guess I Died

The world spins as my head went flying. I was only the head gardener of a sect. I was a man who survived harsh times, but now I've been killed by a "hero."

This all started when a member of my sect bumped into this hero. Even when that sect mate begged with his forehead on the ground for forgiveness, it fell on deaf ears. The hero was so furious that dust got on his tunic that he declared a blood feud. This tragedy happens all the time, who knows what will set off a chosen person or random hero?

'Will anyone mourn this poor man's death?' John thought in his last moments. As a light flashes from the ground around. John smiles as his head hits the floor joining his fellow sect members.

A glowing deity looks at the insignificant soul. "Let's see, wow, I haven't seen such a weak soul in quite some time. It's hard to tell anything from such a pathetic soul. Even mortals are better than this," The god states.

A servant walks up and bows reverentially. "Should I dispose of it, master?"

"Hmm? Oh, I guess it was alright at gardening," the soul sorting deity Pauses to consider, he then shakes his head. "No, the plant division is always complaining that they need more souls," he says. Without any more thought, the deity throws the small soul in with a bunch of other weak souls in a basket.

A short time later, a small, white, fluffy seed floats through the air. 'What's going on? Where am I?' A shocked John tries to yell, but he has no mouth with which to speak. In fact, besides knowing that he is floating through the air, he can't sense anything. Typically, this would send him into a panic, but something told him that this was how things are supposed to be.

'Was my soul refined into a magic item or something?' He asks himself while searching through his memories. He soon finds that there is a deep-seated instinct there that he didn't have before. 'He is just a small seed. He needs to float and find a place to grow.' This small quiet voice seems to remind him kindly. Unlike animals that have sharp, overpowering instincts that force them to slaughter and fight, plants are different. Plants have a gentle and calm instinct. This instinct lacks the urgency that even humans feel to hurry and survive. A seed can float for months, or even years without worrying. When the time is right, things will happen naturally.

John enjoys his relaxing time floating through the air. For humans, being alone with no sensory stimulation would drive them insane. However, as a plant, there is a robust calming feeling. "Everything is as it should be," gently repeats in John's head. For John, his previous life wasn't a good one, and he had had a hard time cultivating. Now he could relax without worrying about sects, politics, or material things.

After floating for an unknown amount of time, things suddenly change. John is now on the ground! A distinct feeling of damp soil intrudes into his consciousness. Roused by the change, his instincts speak once more, 'It's time to grow!'

'Wait, how do I grow?' John worries. He has never been a plant before. What if he messes up? 'Well, it can't be worse than my previous life,' he concludes.

Slowly but surely, John splits open. It is surprisingly painful and mentally strenuous. John shakes as he endures the feeling of being torn in two. It's not like he has a choice; it is a natural part of his new life. The instinct keeps him calm as it lays out what he has to do. John feels pity for his past self. 'Is this how those great demonic beasts cultivated?' He had to scrape and beg to get basic cultivation techniques, but now this instinct just gave him a step by step guide to growing.

After an hour of excruciating pain, small spindly roots begin to sprout from John. As the roots slowly dig into the soil, he feels the exhilarating thrumming of the earth. Though soon, h has exhausted the energy in the seed. The lack of power leaves him feeling exhausted, but he has now started his next phase of life. Following his instincts, John begins to suck the nutrients from the damp earth, but it is a slow process. He had never felt so exhausted in his previous life. Still, he feels very accomplished now that his new life has started!

Hello, I want to say something about how I'm writing this. I release these as I finish them. This means there are innumerable grammar errors and mistakes. This is definitely an excuse. I fix what people tell me when I have a chance.

If you want to read the story a more refined I will be releasing the story on amazon when its complete. This release with have a paid editor and a lot of polish added to it.

Readers both inspires and the input helps me greatly.