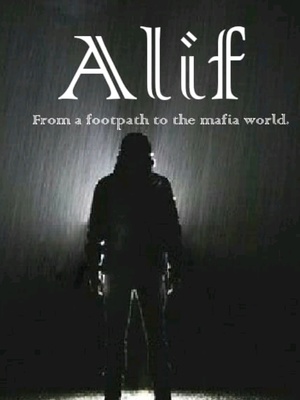 "Ram didn't kill Raavan, Raavan's ego killed him"; Said my hindi teacher. I am Alif... Alif siddique, Son of Humza Siddique who is a science teacher, My mother died when I was five, She died in a car accident in bombay. I had a close relationship with my cousin Sadat, his father and my uncle was too a teacher. My father often told me and sadat the story of firown, Who thought he is the god, after narrating the story he used to say "there is only one god, nobody can take his place, we should be happy in what he has given us." After listening I told sadat why should not we make what god has given us bigger, In return he would just give me a smile. Sadat was my jin and I was his aladdin. One day we all went to a family picnic, we were enjoying, I saw three men running towards us followed by police, they were criminals for sure, I pushed one of them towards ground, Other two ran away, Police Inspector Dashrath thanked us, I unaware of what was coming, The same night after having dinner I went to buy ice-creams, While returning What I saw stayed in my mind for forever, I saw my house burning, people were throwing water over it and once my fathers body was brought, I ran as hard as I can, This was the start of my life of race. Many days I slept on footpath, didn't eat much, I had some money but didn't spend much, To do somework this poverty took me to "land of dreams"--- Bombay, To find some work I hadn't to do much, Manik bhai, a ticket blacker, gave me work, he was a nice guy and used to say " One who is expired is harm to our bussiness". I found a buudy their while working for Manik bhai, Ronak, He reminded me of Sadat, We started blacking tickets it was easy, Buy tickets worth 150 and sell them for 1500. *After 5 years*

For five years I and Ronak had mantained a good relation with manik bhai, He even gave me a tag of being his Right hand. In these five years I came to know that not only Tickets, they also smuggle drugs and Manik bhai was'nt head of this all, it was "Suresh Ramkant" a famous enterpreneur, He gave money to manik bhai, and he got 70% profit. One day Manik bhai took me and Ronak with him for drug deal we didn't knew what was going to happen, First we took drug boxes from then instead of giving them money Manik bhai shot them except a young boy who was with them, then he gave me his gun and said "Kill him". I looked at manik bhai, it was like a horror movie then he again said "Press the trigger" and I pressed it immediately, I killed him, I felt a great power in me and got a feeling of being an immortal.

Another two year passed we were having loss in bussiness, Our drug deals were cancelled due to other gangs gaininig more, One day as we were going for a drug deal, we did the same, killed them, Manik bhai was moving towards gun boxes, I aimed gun towards him and killed him, Ronak looked towards me, I said "He was expired", Ronak smiled in return, Everyone thought Manik bhai died in a cross fire, As per rules closest to Manik bhai was to be chosen as next leader and that was me alongside ronak. To make more profit We brought new men, Harsh--- A 12th pass with high skills, James--- A roadside theif who was also known as "killing Machine". Smuggling was'nt easy like we did, The drug route was--- Pakistan---Rajasthan --Gujarat---Bombay. I changed it, Now it was like, Pakistan--Rajasthan---Delhi(Where half of the drugs was unloaded)--- Bombay from their drugs were unloaded by Ships and then to a shop, from where our men will go and bring them. Me and my men stayed in Bohrichawni, A huge area which was influenced by alchohol. I, Myself never drank a glass of alchohol but I wanted to Transport it their, We rented a house their. I wanted Bohrichawni in my control, I discussed the idea with my men, Harsh said "This area is under Dharmesh Danraj who is also a drug dealer but he is triple powerful then us" I looked at him then cutted a page and gave it to him and said "put it under the sun, and burn it, will it burn---(he did a no gesture)--- " then I gave him a magifying glass and said "will it burn--(He did a yes gesture" while he was burning the paper I told him that we will just get a little of bohrichawni under like the light just focusses on just a little part of the paper and burns the whole paper, They understood what I mean't. We started selling drugs to the least Dharmesh populated area, On the other hand dharmesh had learn't about our plans, But he didn't give a shit. Suresh Ramakant was happy with my work he gave me money for alchohol, we started getting more and more profit from alchohol, and now their were two bhai's in Bohrichawni-- Dharmesh---Alif siddique. Dharmesh used to work for Kartar sing a punjabi don, Who had a bigger influence then suresh Ramakant, But they were both friends, getting against dharmesh would result in a huge gangwar, so I never thought of it. One day as we were sleeping I got a nightmare, Reminding me of death of my family, it was like that it was coming to haunt me again. On the other hand in bohrichawni police station a transfer took place-- inspector jairam who was our men was transferred and a new inspector whom people called "S.D Saheb" who was very honest, his honesty took him to me, He came and sat, "What would you like to have Chai... coffee" I said and he continued by saying "Vodka,oephim, Visky"--- "What do you mean" I asked

"leave this criminal world" he replied and the he left.

He stopped my several Retailers from selling drugs, I contacted suresh Ramakant, But he couldn't do much. I went to police station to meet S.D saheb, To offer him money but instead he said "I will give you double of the money you offer me"--- "Hey you dog of govt." I said " And you dog of suresh Ramakant, get lost" he replied, I went back I got angry, I even slapped james for no reason".

One day while coming from jummah nammaz, I stopped a rickshaw But a girl came running and jumped into it, "I stopped it" I said "where you have to go" she asked "Bohrichawni" I replied "I too have to go their" She said; *While in rickshaw*

She introduced herself to me and I introduced herself to me as she went down from the rickshaw we were attacked by the men of Dharmesh, I thought I was dead I had no gun, Then harsh, james and Ronak came They were too lashed out, I was remembering my Sadat, Then three bullets came and killed those three men, It was S.D saheb who saved us, "I will always remember this" I said. On the other hand Hindus In our part were warning me as they neve wanted to be under to muslims (me and S.D saheb). I told Harsh to get information of that girl in richshaw, She was daughter of pandit arvindnand and her name was seeta and she was doing l.lb, they didn't have much expenses for her studies, And the a idea grew in my mind, I thought to give all hindu families money to teach girls, To get money and take my revenge I planned to kill dharmesh but I got a call from Suresh, I went their and he said " Whatever had happened on Jummah forget it please.." I got up and asked him "Can you give me money".

Suresh Ramakant gave me money to teach girls, Pandit arvindnand and other parents came and thanked me, I was happy with myself, S.D saheb had a smile of victory on his face.

S.D Saheb tried to collect evidences against me but failed everytime due to political pressure and Bohrichawni was now parted equally, People preffered my products instead dharmesh's, to give my bussiness shape I opened a restaurant, So nobody could suspect me, My restaurant was gaining money rapidly.

It was 1994 and I was 22 now and it was my birthday, everyone wanted birthday party, I gave them a party everyone enjoyed after party I got blood warmetting And Ronak took me to hospital There I came to know That I was suffering from Blood cancer.