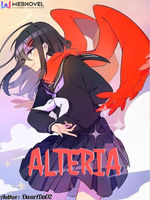 "If you were to live in another world, what kind of world would you like to live in?"

A voice of a woman resonated around the street where people, vehicles, and everything else stopped moving.

"If I were to live in another world, I want a world where I can live in peace and without trouble."

A voice of a young girl followed suit, but who answered the question?

A soft groan escaped out of a young girl's mouth as the touching sensation from the tip of her nose pulled her out of slumber.

There, she saw a butterfly sitting right on top of her face as it gazed right back at her.

It has such beautiful, colorful wings. It's nothing like the ones she had seen back in her old house backyard or the loud, and polluted mainland where she was currently living alone. What's more, this particular creature gives the feeling that the girl describes as:

"It's something out of the ordinary."

That moment, the butterfly resting on top of the girl's nose began fluttering its colorful wings.

It then flew away after noticing that the girl's awake.

The girl tried to follow the butterfly's track through her gaze, only to yelp as the blinding light of the sun met her charcoal eyes.

It was all thanks to the cold breeze running through the atmosphere, as well as the black blazers that covered most of her upper body. Without it, the girl would be feeling toasted right about now.

The girl tries to stand. After doing so, the girl who appeared to be a high school student tries to remove the dirt around the back of her short bob hair and her black blazers, as well as the back of her black and white pleated skirt and black stockings. Of course, she didn't forget about her black slip-on shoes.

But suddenly, a strong gust came out of nowhere. Taking the girl by surprise.

"What the?!" The girl raised her right forearm, covering her face. "Where did that... Huh?"

In that same moment, flower petals, each varied in colors, fluttered around the girl as they dance with the wind.

This urged the girl who covered her face with her right forearm, to move it away, allowing her to see a beautiful spectacle all around her.

Her eyes widened, and her jaw dropped in awe as the beautiful flower field surrounding the girl, rendered her speechless.

Aside from some trees not far from her, stones peeking like whack-a-mole amidst the myriad of flowers, the silhouette of mountains, and the towering cluster of trees in the far east. Everywhere the girl looked, the land is covered with nothing but flowers.

The young girl couldn't finish her sentence as the blurred image of her younger self along with a man and a woman smiling happily and merrily flashed right before her eyes.

With a hint of dejection on her face, the girl turned silent. But soon after shaking her head, her expression turned back to normal. She then asks herself, "Where in the world am I?"

Her eyes wandered, but just like before, only the vast flower field can be seen. There are no buildings, no vehicles, nor any signs of life within her line of sight. She's all alone in the middle of nowhere. At least, it's what she thought.

"Am I really standing in another world? Or did that voice just lied to me and I actually died and now I'm in heaven? Could it be that she's just my hallucination?"

As she bombarded herself with questions, a strange bouncing sound started resonating in an increasing volume behind her. When she spun her head around to see what's approaching her, she started questioning herself once again if what she's seeing is real or not.

Its size is that of a basketball, dyed in light-blue color, and it has a soft, transparent body that allows the girl to see what's behind the creature.

In truth, the girl is quite familiar with the creature. She encountered the same thing before, at least in a game she was playing back when she was five years younger.

Without a doubt, what she's seeing right before her eyes is a slime.

Normally, if one sees a bizarre creature or if a player encounters a monster for the first time, they would either run or call for help, or keep their distance from the said monster to analyze them. But, the girl did not move a muscle. And that's because she was too fixated on gaping at the slime.

Her brain's too occupied contemplating what she's looking at. Is it real? Or is it just a part of her hallucination? Did she got transported to another world where slimes exist? Or did she die from the car crash? There's no one out there that could answer her questions, at least for the moment.

Before she realized it, the blue slime's already right in front of her.

The slime leaped forward and came face-to-face with the girl. Seconds before the disaster occurs, the girl sees a swirling water vortex inside the blue slime's transparent body.

Without a moment's delay, a powerful burst of water pressure struck the girl on her defenseless head.

It was so strong that she was violently pushed back by a meter before she fell with her back against the ground.

After that, the blue slime went on its way as if nothing happened.

"That hurt..." The girl complained after coughing out some of the water she swallowed during the attack. "But, it tastes good."

To her surprise, the water that came from the slime tasted just like any mineral water in her world. And so, except for the fact that her face and her school uniform are soaking wet, and her back tingling in pain, the girl is grateful to be able to drink such good water.

Again, her back is covered with dirt and she had to go through the trouble of removing them again. But she couldn't care less about it. Because of that ordeal, she figured out the answer to one of her questions.

From the blinding light of the sun, the feeling of the butterfly touching the tip of her nose waking her up. And then, the sudden attack of the blue slime.

"That confirms it." The girl spoke whilst squeezing her black and white necktie dry. "I'm alive, and I got transported into a whole new world. However..."

Just then, the same sound that the blue slime make when it bounced up and down echoed all around the girl.

The moment she stood back up, it became apparent that the beautiful flower field which rendered her speechless just moments ago wasn't just any flower field like the ones in her world.

Indeed, this land of flowers is the home of a swarm of slimes.

With her face darkened, and her fist throbbing furiously, the girl angrily shouted: