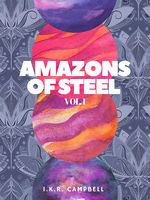 Kristma is a young and shy girl who lives in the small but cold colony called Douleia, the most famous colony of reproduction. The home of all future pallakis (concubines) and first ladies (wifes) of Mor Empire.
Cael is a Iudex, the person who has the responsibility of judge and help the Emperor Aurelius.
Aurelius is the most handsome Emperor that Mor knew in all your three centuries of existence.
His white hair and gray eyes what are adored by all pallakis and first ladies hinde a disturbing danger.
By a trade agreement Kristma's father sold her to Cael and now she is his pallaki.
As his pallaki, Kristima gonna learn that if she wants to keep her luxury life like a Iudex pallaki she will need to be smarter than the other pallakis that will do everything to win the heart of Cael who since the first love night when Kristma became his pallaki he can't take her off his mind.
Ilyada, the Cael's first lady, accepted that she is not his love anymore and feels thankful for that because now she can fight against her the true enemy, the Emperor Aurelius, her fist love that now is her biggest enemy.