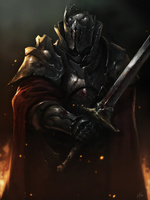 -It's a novel about second chance and time loops in a dark fantasy world. Is the story of a man and his struggle against overwhelming and hopeless threats, to save a world. -

If you could go back in time and fix your mistakes and bad choices, would you do it?

When I was summoned to another world with every other human on Earth to serve as a front-line soldier in a war against an invasion of nightmarish creatures, I knew right away that I was going to shit my breakfast on my pants. Especially when they said that with the powerful blessings of the Wizards and the Gods, they were going to turn us into superhumans and half-wizards, everything they said sounded like "you're a fucking cannon fodder!".

I was right. The war? We lost him so badly that all races became extinct. Me? I was a fucking veteran who survived until the end. Was I strong? Fuck yeah of course, I was, except... it was useless, I died like everyone else.

- If you believe that because the protagonist knows the future or that since it goes back to the beginning each time, he can easily become OP or save the world, you are wrong.

The mechanics of Die & Retry are present because it is impossible for the protagonist to win without it, or dying a stupid number of times. Do you remember the Die & Retry games? Maybe you do, those games were hard -stupidly hard-, and this novel is based on one principle: that it is almost impossible for the humanity - except with the sacrifice of legendary heroes - to defeat the darkest creations of the universe. -

Tags - what you will never see: a harem, psychopath MC, blue screens, abusive use of plot armor, see the treasures and secrets that fall into the hands of the MC as if the Gods were pissing on his face from heaven.

Author note: I am not a native English speaker (I'm a damned French), errors of grammar and syntax that I would be unable to see despite the time invested in editing to correct them will inevitably be present, so help me please!