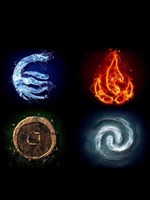 A young man silently slept past midnight in the Third Floor of the Tower of Sagacity where most of the apprentice mages of the Regal Academy are accommodated. He suddenly woke up after someone whispered on his ear, ruffling his dark brown hair.

The young man, Lyrr, stared back at the hooded figure who disturbed his peaceful night. Ah, yes. He forgot that they agreed to go on an adventure in an excavated site. He groggily stood up from his bed and went to a corner, grabbing his teal blue Apprentice Robe.

"Where are the others, Clive?" Lyrr asked, wearing the enchanted robe that granted him Arcanic regeneration and magical resistance. It wasn't even at the normal grade but it was better than a novice robe.

"They're outside.. Let's go! Let's go!" Clive waved at him, barely containing his excitement.

Lyrr followed outside and gently closed the door to his room. He then turned around and saw Clive whispering with two other apprentice mage. A sigh left Lyrr as he approached the trio. They were his childhood friends and the main reason that he entered the Regal Academy. When one decided, all must go!

"Have enough with your hand girlfriend?" One of the figures greeted Lyrr. Visible strands of blue hair draped on his face as his aqua blue eyes flickered beneath his hood.

The group stifled a chuckle as Lyrr countered, "Is that stain I see on your robe, Setiz?"

"You forgot your spatial bag," The last unknown figure pointed. Lyrr immediately went back to his room and came out with a glowing leather backpack.

With a nod, the group sneakily went down to the second floor. They passed a room with a half open door and heard someone curse. The senior inside might have failed an arcane experiment.

The four were the youngest of all the apprentice mages in the academy. This is one of the stages that most mages would get stuck for a while.

With a chuckle, Setiz led the group to the spiralling stairs that eventually ended up on the first floor. Mage lights occupied the ceiling. They couldn't help but swallow while wondering if those mage lights were filled with surveillance eyes. Going on an adventure in the dead of the night, the archmage would surely reprimand them and gave them punishment as a reward for breaking the rules. Normal people in Asalis are afraid to see wandering mages. Usually, mages can cause the most destruction of properties on a whim than bandits and vandals thus a law was implemented, banning mages in the Kingdom. Novice and apprentice must seek permission from the Grand Mages before leaving the premises of the Academy. They didn't.

Since Setiz wandered most and knew every corner of the Academy, he was most qualified to lead the group in this illicit move. The gate was secured by two energy crystals that zap anyone who force their way through. Magical runes embedded on the floors can detect movement and alert the Grand Mages. If that wasn't enough, great elementals that patrolled the entrance can easily decimate intruders.

Going over the walls was also not an option. The academy was once a citadel built on a cliff as a last resort by the people of Asalis during the Third Era of Magic. This is why the three raised their brow at Setiz when they stopped beside a wall on the far side of the Tower of Sagacity.

Setiz only revealed a smile as he started removing a pile of stones that concealed a hole on the wall. He then retrieved a very long rope in his spatial bag and strapped one of its end on a stone, before he shoved it on a crack on wall. After pulling the rope for several times to test if the stone won't escape the hole and cause them to fall to their death, he confidently waved at the three.

"I don't think the rope is secured," Clive hesitated with a shake of his head. Setiz snorted as he stared with a bored face at three who started to scurry around.

"I think this lantern pole would suit the deed." The last unknown figure whispered.

Clive immediately grabbed the stone which Setiz shoved in a crack. With a few twists, the stone was relieved and Clive dashed into the pole.

"Are you crazy?! We're gonna get caught!" Setiz tried his best to lower his voice. The pole have a visible silhouette and someone would eventually find the rope strapped around it in the morning. And he wasn't sure that they'd be able to return at first light.

"I'd rather get caught than die!" Clive wrapped the rope around the pole while Setiz stared at him with grudging eyes.

With a sigh, Setiz resigned to his fate and went down first. Clive was the last one to go down since he's the most cautious of the four. It was a hundred foot fall, he took twice the time than the other three before he finally made it down.

"It's cold!" Lyrr rubbed his arms and turned to the last unknown figure, "Ytir, make us a heat orb!"

Ytir rubbed his palm and whispered the arcane words. Soon, a glowing red orb popped up above his palm. He let it hover above them as they strolled into the darkness.

"Wait! I can't see! I can't see!" Setiz abruptly stopped on his track, causing Clive to bump on his back. The heat orb was not providing enough light so Setiz retrieved a torch in his spatial bag.

"Fooock you, Setiz!" Clive massaged his nose that collided with the back of Setiz' head.

Casting a mage light would definitely create a commotion if someone oversaw them in the academy. It was better that they are assumed as random people taking a stroll in the night.

Minutes passed when they finally reached a path that led to a mountain called, Lorru's Peak.

"It will take us half an hour before we reach the excavation on the base of the mountain." Clive said as they continued without anymore delays.

The open plains seemed to give them fresh air. They were inside the Academy for three years straight, focusing only with their study of magic. This time, they were reminded of home; a peaceful village located in the outskirts of Asalis. However, they each shook their head. It was no longer called home ever since that incident five years ago.

"You see that?" Lyrr pointed a finger at a silhouette moving at high speed towards their location, causing them to halt.

Upon closer inspection, the four nervously glanced at each other. Ytir raised a hand and breathed Arcanic on his palm. A translucent orb caught the air of energy and burst into flames. He then hurled it on the silhouette, "It's an ogre!"

The fireball exploded upon contact with the creature which was followed by a deafening screech. The other three started to cast spells and they bombarded the creature with fire, water, air and earth reinforced with Arcanic.

The creature slowed down a bit but kept on advancing towards them. When it came to the reach of light, it's blue gaunt body evidence of malnutrition was covered with burns and wounds. It was ten foot tall and steadily growing.

"It's healing! Lyrr! We need something to keep it occupied!" Setiz shouted as he run to Ytir's side.

A concentrated ball of Arcanic appeared on Lyrr's palm. He then whispered the arcane words, giving it consciousness before he slammed it on the ground.

An Earth Elemental dug itself out of the ground while Lyrr retreated into the distance. The ogre locked on a target and gave chase. But before it could make it's fourth step, the Earth Elemantal tackled it and both exchanged strikes. The deadly meelee went on for a minute. The elemental was visibly being pushed back as chunks of earth forcefull left its body with every punch it took from the ogre.

Fortunately, Setiz, Clive and Ytir finished their Arcanic Fusion. And then a huge fireball descended on both the elemental and ogre.

Earth, blood and flesh were flung in every direction from the devastating explosion. The four let out a sigh of relief.

Clive sprinted to the remaining corpse of the ogre. The others were late to react and cursed as the latter who retrieved the most valuable ingredients from the corpse.

"Hey! Hey! Do you mind sharing?" Setiz glared at his friend who simply abandon friendship just to have the most of the loot.

Clive only flashed the latter a smile and continued to dissect the bloody mess with a knife. Lyrr and Ytir joined in the butchery while Setiz gnashed his teeth.

After awhile, bloody pouches where put inside their spatial bag. They then continued on the path, occasionally conversing on how to create a potion of regeneration. It was at this moment that Setiz retrieved a bottle in his spatial bag and gulped down half its content.

It only took me an hour and a half to finish this, so feel free to point out any mistakes and something I missed. And do add it on your reading list. There will be a random updates everyday, depending on my schedule.