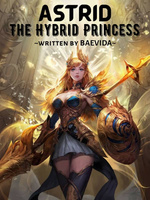 A great war has started between the great races.

In the middle of it all, something that never should have happened had occurred. A hybrid was born. Rumours of this hybrid being the most powerful being in existence spread through the land.

Through certain events, she was lost to all, yet sought by many who wanted her for the powers she possessed.

Now, Astrid must venture through the magical realm in search of her mother, her kingdom and the truth behind the war, all the while escaping the schemes of the other kingdoms.

She, Astrid is the caring, beautiful, talented, powerful, yet extremely impatient hybrid.
He, Jareth is the cold, dashing and skilled elf who locked everyone out.

What happens when these two characters meet on her journey and a forbidden love springs forth amidst the clash of swords?
Would Astrid be able to resist the charms of the handsome Elf and focus on her journey or would she succumb and in turn, endanger her life and mission?

"Why do you do this every time?" Not that he didn't know the answer, he never failed to let her know what she did to him with that.

Before Astrid could answer, Jareth closed the gap between them, with Snow sandwiched in their midst and pressed his lips against hers, shutting his eyes close.

Unlike the last time, this time she was partially, mentally prepared for what he was going to do and returned his kiss, parting her lips to grant him entrance and closing her eyes to feel every single bit of it.

One hand snaked into her hair pulling her closer as he deepened the kiss and the other caressed her face lovingly.

As much as Snow wanted to watch, he felt that he should give them space and privacy.

Quickly, it wriggled itself out of her arms, falling to the ground close to her side and looked up. His silly master only gasped from what he had done with eyes still closed and that only gave Jareth a better chance to be more mischievous.

He bit on her tongue, sulking and tasting her as his slender hands on her face moved down, finding their way around her side, to circle around her waist and pulled her body closer to his. She followed his lead and wrapped her hands around his neck lovingly.

Astrid felt their bodies collide, that coupled with how passionately he was kissing her, only made her want to melt in his arms and stay there.

Jareth finally broke the kiss and his hands on her head moved forward to cup her face and chin. "Wait for me," his deep sensual cool voice rang in her ear, sending warmth down her stomach, making her further weak in the knees.

"Be careful," Astrid whispered back.

"He wouldn't play fair from the way things are going."

With their faces so close together and nose touching, she could feel his warm breath tickle her cheeks, causing her to blush a crimson red. His green eyes shone with delight at watching her blush then quickly placed a kiss on her lips again before letting her go.

Cover not mine, all credit goes to the original owner.