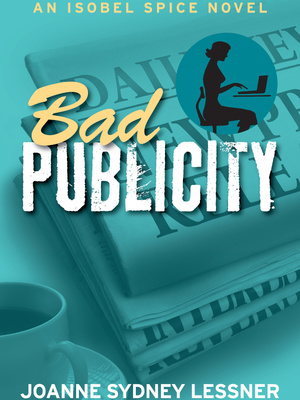 Author:
Writer, singer and actor Joanne Sydney Lessner draws on her own experiences pursuing a performing career in New York City for her acclaimed Isobel Spice Mysteries. With her husband, composer/conductor Joshua Rosenblum, she has co-authored several musicals, including the cult hit Fermat’s Last Tango and Einstein’s Dreams, based on the celebrated novel by Alan Lightman, opening Off Broadway in November 2019. Her play Critical Mass received its Off Broadway premiere in October 2010. Joanne is also a regular contributor to Opera News and a graduate of Yale University.

In the world of PR, there’s only one crime worse than killing a deal—killing a client.

Aspiring actress and office temp Isobel Spice finds a warm welcome at Dove & Flight Public Relations, thanks to her old school friend Katrina Campbell. However, the atmosphere chills considerably when Isobel unwittingly serves an important client a deadly dose of poisoned coffee. Her stalwart temp agent, James Cooke, rushes to her aid, but balks when he learns that the victim was the fraternity brother who got him expelled from college. News that Dove & Flight is being acquired by an international conglomerate quickly supplants the murder as the hot topic of office gossip, but Isobel is convinced the two events are related. When all roads of inquiry lead back to Katrina, Isobel is forced to consider the possibility that her friend’s killer instincts go beyond public relations.