Being Adopted By A Demon - others

/ others / Being Adopted By A Demon 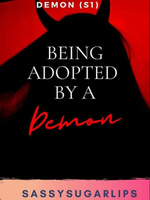 Being Adopted By A Demon

There was a girl, living with her poor parents, she was only seven years old, but she can already do the house chores, and she can even cook very well too, she's not just good at helping and doing chores at home, but she's also—very obedient and very cute, but because she and her family we're very poor, and her dad doesn't even have a job, her parents struggle a lot to earn money, so her mom and dad made a decision to sold their daughter to someone who wants to buy their daughter in exchange of a big amount of a money and a house.

But— because their daughter was so cute, a man which her parents didn't know that it was a demon, approached to her parents and asked if where he could adopt a child, the Little girl's parents was so happy to heard what the man said, for they were actually planning to sold their only daughter to someone.

And when the girl was walking back her home, she was almost going to get hit by a truck, but eventually everything stopped and she saw a man standing in front of her with two horns, she thought it was a Halloween Costume, but when the man brought her to a world she never expected, the demon then told her that her parents sold her to be her daughter.