Being An Immortal Is Tiring! [BL] - Romance

/ Romance / Being An Immortal Is Tiring! [BL] 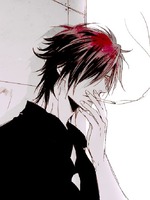 Being An Immortal Is Tiring! [BL] BIT

The body laid against the against the alleyway.
The beautiful man slept peacefully, the blood oozed in all directions. His wounded shoulder sagged against his chest, his skin bunched together on the floor next to him, all cut off.
His beauty didn't decrease, in fact increased. His silky, raven hair was tied into a loose pony tail, his tanned skin, glistened with the flecks of blood on his delicious neck, his Adam's apple looked so sinfully beautiful that even god would be tempted to gawk at it.
His rosey-slightly chapped lips was pulled into a straight line, as if he was bored.
The beautiful mans, shallow breath, started getting stronger, his flesh wizzing around like a parasite.
His flesh was intact.
Opening his sharp Phoenix eyes, the golden hue narrowed down to his murderer.
"Klance"
klance looked back down to the body.
Seeing the body alive and well, he cursed under his breath.
"I thought I killed you this time jack, aww." He pouted like a child.
"How many times do I have to tell you, I can't die".
"Ehhh, but-but" he started stuttering.
"How?!, no matter how many times I try, you don't die"
This was the 28th time klance had tried to kill him.
"Then this should be your 28th lesson, now open your useless eyes and listen to me carefully, I. Can't. Die."

//:/::
The story of a depressed immortal,
Stuck in time as a twenty eight year old. Living, only trying to die.
Until, a sweet, glasses wearing freckled brunette was pushed into his life. Literally.
How will our couple progress?
Glasses wearing boy and sad, mean gong
What a combo!