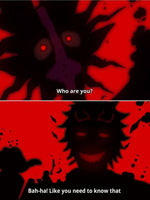 "RODNEY YOU ASS!!! GET YOUR ALARM CLOCK OUT OF MY ROOM!!!" yelled a teenager as he held an alarm clock which had a picture of a girl with 'suspicious' third stuff all over her body.

"*Sigh* First he leaves the alarm clock in my room and he is now not waking up. Just keep it in your room to begin with bastard."

The boy then walked towards the room where the so called Rodney was and then knocked on the door.

"Rodney, Rodney, wake up Rodney.....I am entering." said the teenager as he entered the room.

Just as he entered the room a strong scent entered his nose making him frown a bit and say, "Bitch, so you had sex yesterday?.....Wait is that Lisa?!?!"

The teenager suddenly yelled making the boy and the girl who were sleeping wake up from shock after hearing the yell.

"R-R-Rodney? What is the meaning of this?" asked the teenager with a shocked tone.

"Oh, brother...well if you have found out already then there is no use hiding it.....Me and your girlfriend, Lisa are having some 'intimate skinship' for quite sometime now." said Rodney with a malicious smirk on his face.

Hearing that the teenager got even more shocked and had his mouth opened wide. His eyes started widening as well as he looked towards the blonde girl named Lisa who was covering her naked body with the sheets.

"I-Is that true L-Lisa?" asked the teenager with a shaky voice.

Hearing that the girl averted her eyes but soon blushed and moaned as Rodney who was beside her pinched her nipple.

"No need to his anything now Lisa, tell him how you moaned and shakes your ass while you begged me for my dick. Tell my oh so great brother about all that." said Rodney as he pinched her nipple even harder.

The teenager gulped his saliva as he slowly walked towards his brother Rodney while looking down.

"What? You want to hit me for having sex with your girlfriend?" asked Rodney still smirking at his brother.

The teenager didn't say anything and placed both of his hands on his brother's shoulders and said, "Rodney....please remain cal-"

"YOU REMAIN SILENT BITCH!!!!" suddenly yelled the teenager as he punched the woman with full force sending her crashing towards the nearby wall.

Rodney who saw that was totally shocked by what his brother just did and how strong he was. He then gulped his saliva preparing himself for his own turn.

"...As I was saying earlier..... Rodney please remain calm and always remember that I loved you a lot as my brother." said the teenager.

"Why do you think I never did anything sexual with her even though she is this sexy?" said the teenager and then showed a medical report on his phone.

"..Ha hah HAHAHAHA!!!! YOU ARE JUST BLUFFING WITH ME RIGHT?!?! YOU ARE JUST TRYING TO LOOK STRONG AND SEEM LIKE YOU HAVE THE UPPER HAND RIGHT?!?! THAT'S THE THING YOU HAVE BEEN DOING FROM THE BEGINNING ANYWAYS!!!" yelled Rodney as he looked like he solved the biggest mystery ever.

The teenager patted his shoulder and said, "...Let's do the things that you wanna do in the remaining time that you have left."

"STOP BLUFFING ALREADY!!! THERE IS NO WAY THAT YOU WILL DATE A GIRL KNOWING THAT SHE HAS AIDS!!!" yelled Rodney.

"THAT BITCH MADE ME ACCEPT HER CONFESSION WHILE SHOVING A GUN IN MY MOUTH!!!" yelled the teenager back at his brother.

"THERE IS NO WAY I WOULD HAVE BEEN ABLE TO REFUSE HER CONFESSION!!! IT WAS JUST A COINCIDENCE THAT I WAS ABLE TO GET A SAMPLE OF HER BLOOD AND CHECK IF SHE HAD ANY OF THOSE KIND OF DISEASES SINCE I KNEW I WAS IN HELL ANYWAYS!!!" said the teenager.

Suddenly both the brothers heard a voice and turned around to see Lisa whose blonde hair were slightly covered in blood.

"Fine then, there is no need to date you anymore." she then looked at Rodney and said, "Looks like my plan to make him jealous by using you failed....well from now on you are my boyfriend *points a gun at him* Understood?" with a smile on her face.

"U-Understo-od." said Rodney gulping his saliva seeing the gun aimed at him.

"Ah, you are so nice.....now then goodbye there is no use for you to stay here." said Lisa as she pointed the gun at the teenager and fired it towards his heart.

"B-Brother!!!" yelled Rodney making the teenager turn his head towards him and smile.

He then raised both of his fingers and said, "...S-s-suffer in hell f-for c-c-ucking me." and then his hands fell down lifelessly telling to Rodney that his brother was finally dead.

Currently in a completely white....no let's go with red....yeah, in a completely red room the teenager who just got cucked by his brother and killed by his girlfriend was sitting in a cozy chair with a cup of tea and cookies in front of him.

"...And that's how I got her blood sample." said the teenager to the small boy sitting on the table and nibbling on some cookies.

Seriously the boy was so small that even the cookie looked bigger than him.

"You really pulled a fast one on her." said the cookie sized boy.

The teenager took one cookie as well and then drank some tea.

"It was a good thing that I thought about getting those tests done...though I am the one who died before either of them." said the teenager with a slightly sad tone.

"Don't worry, I will let you have a second chance in life like I told you." said the small boy as he walked towards him and patted his finger trying to comfort the teenager.

The teenager smiled and said, "Aww, so sweet of you....I wish I could have you as my brother instead of that piece of shit.....no, calling him shit would be an insult to shit itself."

"Y-you really mean that? Me being your brother?" asked the small boy with glittering eyes.

"Then let's become brother!!! From now on call me Nii-chan!!!" declared the small boy who was not even the size of the teenager's thumb with an excited tone.

The teenager chuckled at the boy's antics and just decided to go along with him and nodded his head.

"Ah, but before that let me give you a second chance at life. Usually I would just reincarnate you back in your world.....but as I am a super cool and reliable older brother I will let you reincarnate in another world!!!" exclaimed the boy.

"Do you like that?" asked the boy with a hopeful look on his face.

The teenager widend his eyes in surprise and asked, "Another world as in those manga and anime type worlds."

"Can that be any world I like?" asked the teenager.

The boy became sad after hearing that and said, "No, sorry. The options are limited, first is a zombie apocalypse world, second is a sci-fi space world and your third option is any fiction material whatever you last consumed."

Tears started to appear at the corner of the boy's eye's seeing which the teenager panicked and said, "Ah don't cry, those options are more than better for me."

"*sniff* Does that mean I am reliable big bwother?" asked the boy.

"You are the best Nii-chan." said the teenager.

"Hehehe, thank you. So what do you want to choose?"

"Can you atleast check what was the last fiction material I consumed and tell me about it?" asked the teenager.

"Umu, I can." said the boy and he started touched the teenager's hand. Soon a glow appeared in the tiny boys hands and after a while he said, "It is a world called Black clover, you read it's manga."

"Umu, leave it to me, I am the best big brother their is. I will send you inside the body of the strongest person in that world and will send that person to a different world before he is born." said the tiny boy.

"There will be some other gifts as well but I don't know what it will be since it will depend on your luck. I will send you now." said the tiny boy as he chanted something and soon the teenager started dissipating from the red room.

"Bye younger brother, we will meet after you are done with living in that world. We will have lots of fun after that." said the tiny boy with a happy smile on his face.

The teeny just nodded and shook his finger with the tiny boy's hand and said, "Thanks a lot Nii-chan." and then disappeared from the room

Currently in one of the houses a baby who was just about to be born started shining but soon that stopped.

'....Seems like it' thought the teenager inside the baby's body.

'Damn, really reincarnation? It's still feels like a dream.....who knows maybe it is. But whatever....let's see the new Nii-chan told me that I will be the strongest person in this world.....but who is the strongest the manga didn't end yet.....so is it something he chose from the current story.....then who might I be, Asta? Yuno? Oh wait, I might even be Yami?....or a dark triard?'

While he was thinking the baby was already out and was in the doctor's hands.

'Now it's time to spank that baby booty.' thought the doctor as he spanked the child.

"Seems like your baby is healthy. Congratulations Mr. and Mrs. Bronzazza, you have a healthy baby boy."

"Bah-ha ha ha ha, thanks you Elaine bah-ha." said the man with blonde hair as he looked at her wife while holding the baby in his hands who was still crying (ranting).

"Show him to me as well honey." said the woman who was likely the boy's mother.

"Here." said the man as he placed the baby beside the woman who finally stopped crying (ranting).

'Oh, so you are my mom. Seeing that you have blonde hair *gasp* don't tell me that I am reincarnated a s Julius. Hell yeah!!! This shit is real serious!!!' thought the baby.

And it was at this moment the child stopped thinking as he became totally speechless hearing his new name.

'...This shit really got serious....' thought the child no...Sekke Bronzazza.

Meanwhile in the red room:

'Hehe my new brother will be so happy, afterall, I did my best and found about who the strongest person in that world was.'

"Thank you Deadpool-san for helping me know what my brother would like."

"Haha no problem kiddo." said a red suit wearing ninja as he looked towards you and whispered, "I am really waiting for his brother's reaction."

Meanwhile at the hospital where Sekke was born: