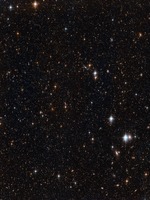 At the most isolated part of the void, there existed an expensive land. None of the old gods' record had any information about this hidden land.

The Rulers of Twelve Novel Celestials Races stepped on this hidden continent. They discovered people with incredible bloodlines strong enough to compete with theirs.

As a potential threat, they decided to destroy them, but they discovered a God Spirit that protected the land. He said, the people of this land had lost their realms, so the old gods had given them land to stay.

Still unconvinced by the Gods Spirit the celestials decided to destroy the hidden continent. Only a newly appointed Celestial named Lunos disagreed and suggested to let the people live.

His solution was to completely isolate the continent from the main realms.
If they were permanently separated, there was no need for destroying them.

The Celestial disagreed and decided to destroy him with the continent. Before his death, with the help of the God spirit, he broke the world into pieces and hid them within his hidden dimensions connected by a river of spiritual energy.

Before his death, an ancient voice entered his head thanking him for keeping his promise. He told him one day he will remember his name, and he will have a chance to walk again in this land. To that, Lunos only smiled.