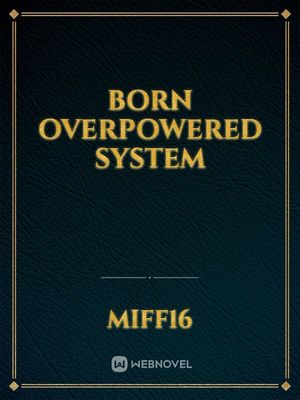 Chapter 1: The System and the Baby

Ben, our main character, is born into a family that loves him and cares about him. His mother unfortunately didn't survive the childbirth, but his father provided the love and affection enough for both parents. Ben was a special because he developed mentally faster than anyone should be able to. When Ben was one month old he gained a certain amount of sentience where he could understand the world around him.

At two months he was able to understand speech and if it wasn't for his vocal cords not being fully developed he would have been able to speak but he realized that no other child that his father brought him to meet could communicate even though they were months to a year older then him.

At three months his system started to make itself known in his self-conscious it would speak to him and teach him about the world around him. His understanding of the world he was in grew to such massive heights because of his one-to-one sessions with his system.

The system, which told Ben to call him BOS, was an upgrading system that upgraded with its user. When his user went up in his mage level or warrior level then he himself grew. BOS himself didn't know his exact origins but he knew with the power increase of his user he would learn about himself and his abilities.

The duo decided to take the inconspicuous approach and hide their intelligence until it was needed. So the seasons changed and the easy life of Ben Moore continued.

Several years later to when Ben was 5 years old

Ben thought of a problem right away because his system unknowingly or some other gift gave him a boost in mana. He learned this when out in the garden his father kept to remind him of his wife, Ben accidentally let out a burst of mana when he was stabbed by a thorn near the rosebushes.

When Ben thought of this BOS was trying to find a solution to the problem when he stumbled upon an unknown ability he had. BOS told Ben to try to think of his strength or any other attribute that could think of and then a clear screen in front of him appeared. The screen showed the following:

With what the duo thought 10 was the base for a healthy adult male and anything below the person was either unhealthy, a child, or an elderly person. What they didn't know was what the ?s were about.

When it was Ben's turn to test his mana he timidly placed his hand on the orb and was scared of what would happen. What did happen was a robotic voice that neither of the two expected sounded.

-Would host like to conceal his mana and activate the BOS system restart?

-Host would you like to conceal your mana? Y/N

-Yes to the concealing the mana part but what is the system restart on BOS about?

-The BOS system would restart with its current memory intact but it would increase the amount he knew. The BOS system would learn about one cheat that the gods allowed the host that had received a large amount of karma points for his good deeds in his previous life. The karma points have been transferred into a group of cheat-like options for the host to decide to have.

-Then yes to the restart, too.

1. Immortal Body (within reason)- your body is nearly impenetrable and will reconstruct itself if any damage is done to anything other than the heart and brain.

2. Perfect Control- you have perfect control over the mana that you have and makes your mana practically limitless

3. Perfect Stealth- no one will ever find you if you don't want them too even the gods will have some trouble.

4. System Hack- information unknown and/or blocked from viewing ( pick this one for an unimaginably overpowered main character)

5. Dimensional Wanderer- allows you to cross worlds and universes at an unimaginable speed creating a time and dimensional distortion which is unpredictable

This is my first attempt at writing this type of story and this first chapter is probably going to be my longest in the near future, but hang with me. I'm thinking about 1 chapter a day and vote which cheat like ability you want the mc to have. Pls give me constructive criticism and don't hold back. To many more chapters in the future. Also vote for the one you want but remember I have the final say

P.S. here is a discord link if you wanna ask some questions