/ Fantasy / Crest of Power: Krevik and the Magician 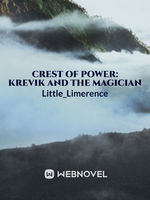 As a young child Krevik's mother would tell him stories. Stories of a Crest of Power and two brothers. Now as a young adult, Krevik has no memory of these tales.

Secrets surround his past. What happened to his mother? Why does Krevik now live in an old castle at the edge of the great Forest of Ern.

He must remember his past to save his fate. Will his uncle the Magician try to keep him in the dark forever?