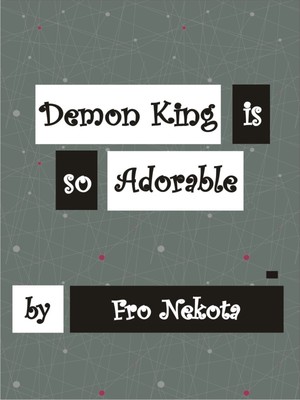 Demon King Is So Adorable

In the dark chamber, a black figure was seen.

He wore a black coat with large hood that was covering his head.

The scene was too similar with some crazy scientist's laboratory that filled with some human eyes or hearts in tubes.

The black figure stood in the center of the room. A table was placed in front of him with many books and papers placed in disarray above it. He bowed down to some paper on the table, writing and muttering some ineligible things that were too low to be heard. Because of the lack of lights, his appearance could not be seen. Only dark shadow with flash of rosy eyes that sometimes flickers inside the large hood.

"…no, no, no, ᚱ should be drawn here, for Raidō symbolize journey for the soul. Then I should use some powder of soul sucking butterflies for the soul and… Oh, right, right, ᚷ also can be used, no, maybe ᛟ rune for possession will be better, but the ingredient for it is…" The black figure muttered out loud before he quickly moved to the corner of bookshelves to picks up a large book. With still muttering, he moved back to the magic circle.

A dark energy then appeared surrounding the figure. The energy was so dark and thick that you could almost touch it. Like some mass of dark gasses that was so thick but could not be touch. They were moving freely surrounding the black figure like a living thing.

"Ah there it is! The ingredient is…"

From the corner of the chamber, a door was opened.

A slim figure walked in to the chamber. It was a beautiful woman. She wore a black and white maid dress. Her long black hair was tied in a high ponytail with a white headband decorate her head. Her skin was pale and smooth. She has a pair of beautiful red eyes that slit in the middle like cat eyes.

"Master, here are the ingredients that you asked."

The woman said while she pushed a cart filled with many jars and bottles to the center of the room beside the black figure.

"Ah, Marie! Yes, that's right. I need 100 grams of powder of soul sucking butterflies, juices of black death flower, then hmm… this one, should I put it in…" the black figure said back to muttering. He didn't even give his servant a glance as he continuously drew to fix the magic circle on the floor.

"Master, shall I bring the human too?" Marie said curiously.

"The human that was you asked yesterday, Master. You said you will use it for the experiment."

He took a quick glance to her servant before remembered it. "Ah, yes, that bug. Of course that bug will be used. Where is it? That bug's better be still alive. I need its body for the puppet." He was going to create a human puppet. Of course he needed the human body! Even though human was so worthless that even a bug felt shame for it, it was still necessary for his plan.

"Of course, Master. I froze its body like you asked so it is still fresh." Marie nodded firmly.

"Huh, froze—?" He blinked. "That, well, whatever… Just bring the bug here. I will start the ritual."

A few minutes later, Marie brought the human like her master requested. It was a young man. He was unconscious and tied up by a rope. Thankfully he was not dead frozen or her master was going to start thinking how to make ice stick puppet instead… (ﾉ^_^)ﾉ

With all ingredient prepared, the black figure finally stood in front of the magic circle to begin the experiment.

"Fufufu, look at this, Marie. Today, your master will create the best and the first ever human puppet in the history!" The black figure chuckled excitedly. Dark energies surrounding him even rolled around wildly as if they were as excited as their master.

"Of course, Master. You are after all the Best Demon King ever in the history." Marie agreed easily. (≧∇≦)/

"Of course I am the best!" nodded the black figure firmly like it was an unquestionable fact.

"Move the bug to the center. Next, pour the red crystal powder to…" The black figure ordered the dark energy that quickly moved as he asked. One by one ingredient poured into each rune with the human was placed in the middle of the circle.

It was then when the final ingredient was going to be put in the final rune, ᚱ for the journey of the human soul after it got sucked by soul sucking butterflies. He suddenly remembered something.

"Wait, the spirit! Marie, you forgot the dark spirit! It has to be put in the small circle next to the bug then—"

His complain was ignored as the magic circle already started to absorb the ingredients. Dark energy quickly got sucked into the circle. Winds so strong suddenly appeared in the chamber. It blew so forceful and loud, pushed anyone—anything that was near it.

The black figure stared wide eyed as the circle continued running so intense even after lacking one ingredient. Burst of lightening also started to appeared wildly, prevented him to approach the circle. He tried to control the dark energy to stop the ritual. But it quickly failed. It even pushed him angrily like starving beast.

Marie quickly moved toward her master to stand in front of him. She has to protect her master from anything that would happen. "Master, should we move away from this place? This—"

"No!" The black figure refute immediately. "This—the magic—if counting rune that was active with ingredients then…. " he suddenly muttered harshly. His lavender eyes stared without blinking into the flaring magic circle. " …ᚱ for the journey, ᚷ for the gift, then… then… its… no way. Don't tell me the ritual is—"

Lightening was blaring aloud suddenly in the middle of the circle. Dark energies then rushed quickly into that place. A loud crack sound was heard after. Air above the circle suddenly cracked like it was going to be split open from inside. A small black hole was then appeared from the crack before split open wide became a large black hole in the middle air above the magic circle.

A large black hole look so ominous was crackling wildly with bursts of lightening above the magic circle.

"No way… " the black figure whispered in awe. "It is really appeared. The gate… "

This is my first time writing an original novel, hope it is received well pfft

I welcome any comments and reviews, especially about the grammars since english isnt my mother tongue lol

Sorry for the cover, I hasnt been able to create them yet huhu

For anyone who hasnt read the warning in the summary, this is BL story (≧∇≦)/