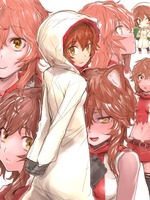 Down, through a pitfall on the twenty ninth floor. Bell Cranel and Liliruca Arde fell, and even though they landed in a body of water, one of them took a few too many hits on the way down. Now without his memories, and both of them without their family, Bell and Lilly find themselves lost in a new world with only a knife, a blessing from a goddess and the clothes on their backs.

However, things at the bottom of the Dungeon might be a literal Hell, but there are people who live there, walking through artificial day and night, surviving off of the meat and blood of monsters around them. A city of black marble and smooth stones, of magic and demons, of stories long lost and creatures that shouldn't exist awaits the two humans who will, in the end, do whatever it takes to cleave their way back to the surface.

Some of the world's greatest atrocities were committed in the name of religion- but now, in order to return to their home and family, Bell and Liliruca will have to turn their back on everything their Goddess, everything ANY God, ever taught them... it will all be worth it in the end, won't it?

It won't be easy. Bell will have to let go anything and everything he cared about. There will be losses, and defeats, and he will have no choice but to spend time bleeding in the dirt before he can begin to climb his way to the top... but one day, he knows, it will happen.


(I accidentally set this as "novel" instead of fanfiction, and now I can't change it. It's a fanfic of "Danmachi/Dungeon Oratoria/Is it Wrong to Try to Pick Up Girls in a Dungeon?")


(Cover art used, not mine, and created by めのもるて or Menomorute on Pixiv)