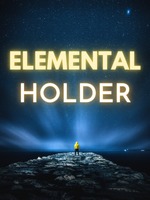 Unknown darkness suddenly engulfed earth, it lasts for only a day but it was enough to change everything.

Different weather suddenly appear without warning such as thunderstorm, hurricane, tornado, tsunami, earthquake even the dormant volcano in lands or the sea erupts. Destroying many countries while killing countless people.

The earth then suddenly expands by hundreds of times and different monster appear in every corner of the world with the appearance of a monster that came straight from a fantasy, even the animals, plants, environment, minerals, etc, evolve and change.

Humanity also felt the differences in their body. They discovered that they can control Elements such as fire, water, earth, air.

But that is just the begging. All the chaos started in the era called 'Usurper' the worst of the worst era ever existed.

Tron was the guy who lost both of his parents because of some circumstances, because of that he suddenly receives money, with that he started his business but eventually close down.

With money remains in his bank account, he decides to become a monster hunter.